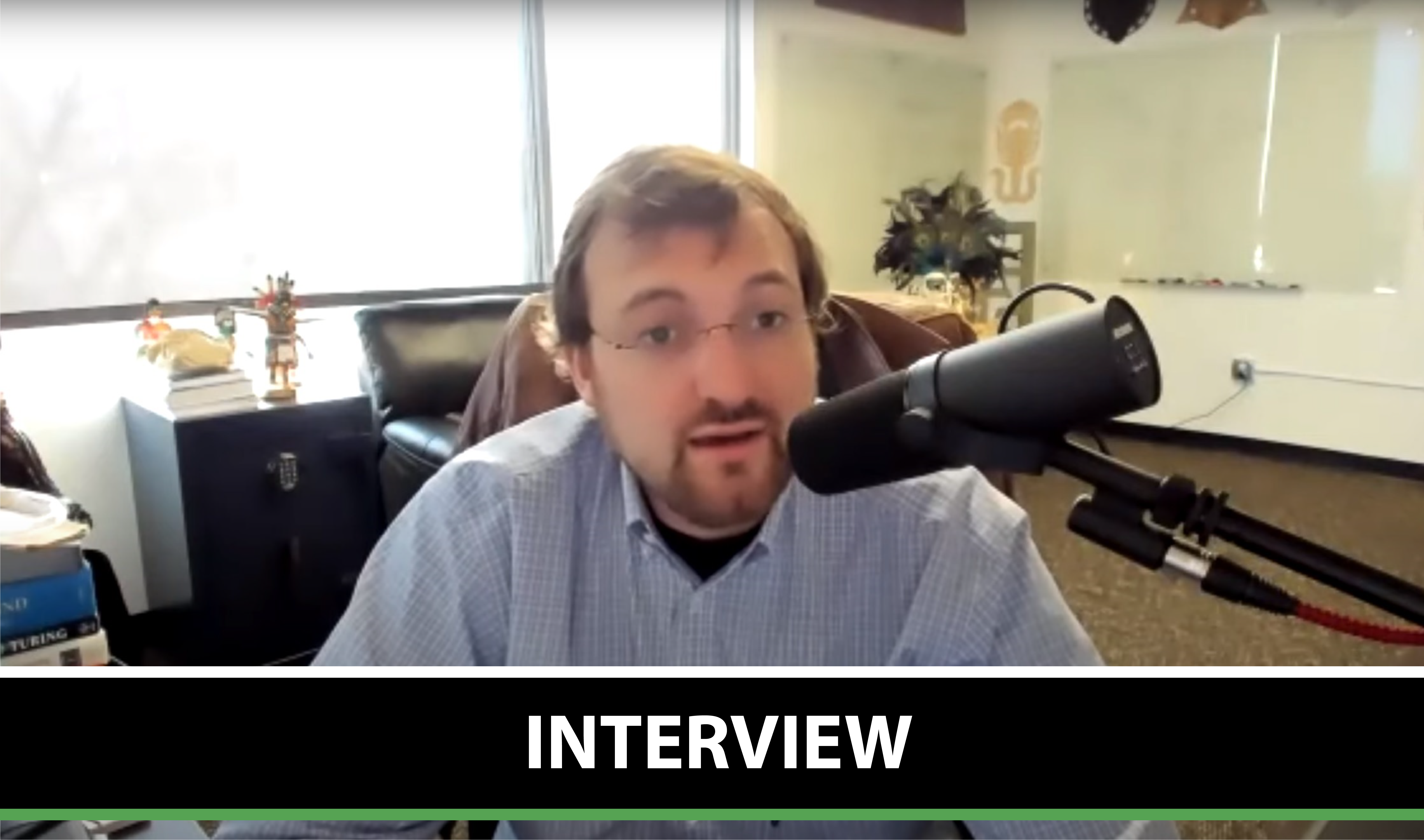 By Ryan Daws | 22nd February 2021 | TechForge Media
Categories: Blockchain, Platforms,
Ryan is an editor at TechForge Media with over a decade of experience covering the latest technology and interviewing leading industry figures. He can often be sighted at tech conferences with a strong coffee in one hand and a laptop in the other. If it's geeky, he’s probably into it. Find him on Twitter: @Gadget_Ry

Blockchain platform Cardano aims to disrupt unfair legacy centralised systems and distribute power to individuals around the world, but it needs your help.

The decentralisation movement really started when Bitcoin was released in 2009 as a global digital currency with a fixed supply that’s immune to inflation, has no central bank, and cannot be shut down.

However, Bitcoin has its limitations. While it’s arguably the ultimate “store of value” asset – which is currently driving its value in a world of endless money printing and low or even negative interest rates – it cannot be used to run decentralised applications.

Ethereum is the most well-known decentralised app platform after first being proposed in 2013. As the first mover, it’s also the most widely adopted. There’s currently over $23 billion “locked” in Ethereum-based DeFi (Decentralised Finance) apps. Cardano thinks it can do better.

Every platform wants to be the “Ethereum killer”

Hoskinson left Ethereum following a dispute about accepting venture capital and the need for a more formal governing structure. He went on to found Cardano in 2015 and became the CEO of the project’s main developer, IOHK.

“Back in 2015, I got to a point where I said, ‘Hey, you know, I have the ability to do a cleanroom approach, where we just assume nothing exists, start from the science and first principles’ and say, ‘Okay, with all that we know, how would we actually build a cryptocurrency if we could do it all over again,’” says Hoskinson.

Six years on, the project is only just gearing up to launch support for smart contracts—something which hasn’t gone unnoticed when even newer platforms have beat Cardano to it. It’s easy to misconstrue as due to a lack of effort.

Cardano’s GitHub is consistently among the most active in the space–-often even more so than Ethereum. Here are the top 10 crypto projects with the most development activity over the past 30 days:

Cardano has taken a notoriously academic approach–-posting around 92 peer-reviewed papers. Other projects have followed the more Silicon Valley approach of “move fast and break things” and we’ve seen the subsequent issues with security and scalability.

Hoskinson and the rest of the Cardano team want to disrupt “big tech” and more fairly distribute power across society, so it shouldn’t be surprising they’re not following the Silicon Valley template.

At its core, blockchain is about trust–-so Cardano’s methodical approach to getting things right from the start has gained it a fair share of fans. But why should developers build on Cardano over Ethereum? Hoskinson explains:

As a consequence, when you look at all of these things, it turns out that Etherum is not really a good experience for all of them. It doesn’t have predictable costs, the on-chain, off-chain stuff is still a bit muddled to a point where people are putting a lot of their stuff on off-chain infrastructure.

There’s a lot of other little problems that have leaked in and that’s okay, you know, they were the first mover and it’s kind of like saying, ‘Hey, building a website on Internet Explorer 6, or Netscape, is that going to be a great experience?’ Probably not, you know, maybe you have to use Flash and all this other weird, wonky stuff to be able to do something.”

The party is just getting started

While critics say Cardano is late to the party, it’s only just getting started. Hoskinson points out that while there are something like 22.4 million developers in the world, only around 80,000 use or know Ethereum’s Solidity language. Of those, only around 10,000 are active dApp (decentralised app) developers.

“[Developers] are writing .NET applications, Java applications, and these types of things. So, the first thing we said is: ‘Is it possible to create a framework that over time can bring all of these mainstream programming languages into our space for both the off-chain infrastructure and the on-chain infrastructure and do that in a safe, sustainable way with predictable costs?’

We launched a project out of University of Illinois, Urbana-Champaign, with a professor named Grigore Roșu, who runs a company called Runtime Verification and they work with DARPA, NASA, Boeing, and these other large companies, and they’re experts in formal methods, virtual machines, compilers, programming languages and so forth. For 15 years, they’ve been working on this universal meta-language called K.

Basically, what K is all about is it allows you to describe the semantics of a programming language and then, over time, it can be used to build all your tooling. And, as you upgrade your programming language – like when you go from F# 4 to F# 5, or Scala 2 to Scala 3 – you could just automatically upgrade your infrastructure without a human being writing a single line of code.

We invested millions of dollars into building out a virtual machine specifically for this, it’s called IELE, and we’re bringing that to market with Cardano probably late first half, early second half of this year. That’s going to allow us to start capturing mainstream programming languages–-JavaScript, C#… and bring them into the current ecosystem. So, if you’re a developer there, you can start writing smart contracts, you can start writing dApps, and you also have a clear way of doing deployments for your on-chain, off-chain code.”

The whole space is currently just a speck relative to the size of the legacy industries up for disruption, especially finance. Cardano has even created a language called Marlowe specifically for financial contracts.

Marlowe is based on the functional programming language Haskell and aims to provide the highest level of security required for financial purposes while enabling such contracts to be created in a LEGO-like, brick-by-brick manner so contracts can be “co-designed with a financial expert, not a programmer” and ultimately broaden who can participate.

Naturally, Cardano believes it offers a better home for those value-generating projects with its lower fees, increased decentralisation, and higher scalability.

Cardano is launching an Ethereum virtual machine – known as KEVM, of which a devnet is already live – to help current Ethereum developers evaluate whether it’s worth transitioning over.

“Anything you can do on Ethereum, you can do on that. So if you want to take the Celsius smart contract, you can go and compile it and run it on the devnet. It’s 100 percent backwards compatible with Ethereum. Really this is first a testing framework to get a sense of costings and also get a sense of portability.

We have things like the ERC-20 converter and other projects, and these are all about porting stuff from Ethereum to Cardano. It’ll just run better, faster, and cheaper on our system. So that’s really the point of that, that devnet is to begin those conversations and get all the kinks out.

Then what’ll happen is we’ll upgrade the devnet to a permanent sidechain. And then that sidechain will run connected to the Cardano mainnet. So, when you deploy apps, you can reuse that code for Cardano’s mainnet and you don’t have to go over and learn Plutus and build on new infrastructure and so forth, you can still stay in the Ethereum ecosystem, it’ll just run better, faster, and cheaper on our side.

It’s kind of like when Mac created boot camp and you could run Windows on a MacBook. For a long time, the best Windows laptop was actually a MacBook Pro.”

Some high-profile decentralised apps, most notably the exciting AI project SingularityNET, have already begun moving from Ethereum to Cardano–-primarily due to the current dApp leader’s notoriously slow transactions and high fees. Ethereum 2.0 is rolling out to address its issues but it’s a process that will take years to complete.

“Current speed and cost issues with the Ethereum blockchain have increased the urgency of exploring alternatives for SingularityNET’s blockchain underpinning,” said Ben Goertzel, renowned AI expert and founder of SingularityNET, earlier this year.

“The ambitious Ethereum 2.0 design holds promise but the timing of rollout of different aspects of this next-generation Ethereum remains unclear, along with many of the practical particulars.“

Goertzel has also called functional programming – enabled by Cardano’s use of Haskell-based languages like Plutus – “invaluable” for blockchain-based AI developments.

During a recent interview, Alex Mashinsky, CEO of crypto lending platform Celsius, also expressed interest in switching to Cardano. Hoskinson believes it’s because Mashinsky is “getting tired of paying $2.5 million per year in transaction fees.”

When asked whether he expects many projects to jump from Ethereum, Hoskinson teases there are many conversations taking place and also with “bigger companies that are interested in entering the space.”

Hoskinson, however, acknowledges that Ethereum has improved substantially in recent months and isn’t out to replace the project but offer developers an enticing alternative in a space which has room for many platforms to co-exist.

“Dapp developers are businesses, they’re building a dApp because they want to accomplish something, they want to solve a particular problem,” Hoskinson says. “You should look at Ethereum and Cardano like you look at Rackspace and Amazon and Digital Ocean. It’s kind of silly if you say, well, you can only build on Amazon.”

After DeFi, interoperability is arguably the next big trend in blockchain–-after all, trading a centralised “big tech” monopoly for a decentralised one isn’t much better.

Cardano is integrating a sidechain protocol which provides a non-interactive way of safely moving value between two chains that support it. This mechanism will be the primary way value will flow between CSL and a CCL layer. Federated bridges are expected to be built with other blockchains as Cardano grows in value and user base. To help accelerate this growth, Cardano supports a restricted version of Plutus for interoperability scripts.

The commitment of Cardano to interoperability can be seen in its support for oracles which enable vital outside information to be pulled in. Cardano is building its own and looks set to use Wolfram Alpha.

“Wolfram Alpha is an amazing engine, you can query and say: ‘How many shipwrecks have happened in Florida between 1950 and 2000 as a result of a hurricane and with more than a million dollars worth of cargo loss?’ And they’ll give you an answer.

To facilitate other providers, Cardano is building a framework for oracles. Hoskinson highlights that it will help to address the key questions like: “What’s the reliability of that information? How much does it cost me to get it? Can it be censored at inconvenient times? Can it be given in ways that bias it towards my competitors?”

“It’s a very complex problem, but it’s a prerequisite to useful smart contracts–-so you can’t ignore it,” says Hoskinson.

It’s often said that there’s an app for everything these days. Truly original ideas are in short supply and it’s hard to compete against the incumbents. Decentralised apps offer a huge growth opportunity while helping to address some of the biggest issues we all face today.

You can watch our full interview with Hoskinson here:

One comment on “Charles Hoskinson, Founder, Cardano: On the opportunities for decentralised apps”