By Ryan Daws | 17th October 2019 | TechForge Media
Categories: Android, App Stores, Industry, Mobile, Platforms,
Ryan is an editor at TechForge Media with over a decade of experience covering the latest technology and interviewing leading industry figures. He can often be sighted at tech conferences with a strong coffee in one hand and a laptop in the other. If it's geeky, he’s probably into it. Find him on Twitter: @Gadget_Ry

Google is cracking down on open-source apps which feature a donation button to help support the developer’s work.

The open-source community has been riled up after WireGuard, a free VPN management app, was pulled unceremoniously from the Play Store for accepting donations.

"They (Google) said it was because we're in violation of their 'Payments Policy,' presumably because we have a link inside the app that opens the user's web browser to wireguard.com/donations/,' Donenfeld wrote in an email to WireGuard users on Wednesday.

According to Google's policy, apps in the Play Store must use the company's own in-app billing system for purchases made inside their apps. However, the in-house billing system currently doesn't support donations and Google takes a 30 percent cut.

WireGuard’s own donation page supports payments via PayPal, Stripe, Patreon, and even Bitcoin.

Someone posted a copy of the email to Hacker News where it’s been at the top of the page for most of the day. Naturally, the email has gained a lot of attention and caused an outcry over whether Google’s policy hurts open-source projects.

This isn’t the first time Google has taken action over open-source apps with donation buttons. Manyverse, an app which describes itself as “a social network off the grid”, was also removed by Google after adding a donation button.

Manyverse’s developer, André Staltz, has been speaking out about his own experience in the wake of the outcry surrounding WireGuard: 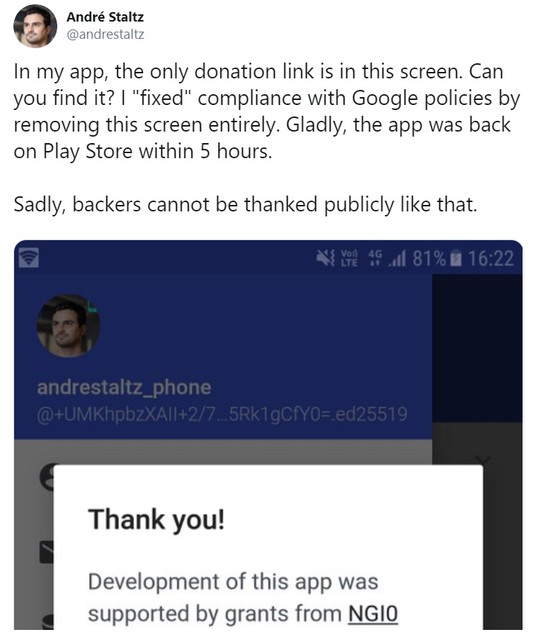 Staltz highlighted that “this is happening to many other FOSS apps distributed on Play Store. WireGuard, andOTP, and others.”

One person asked Staltz whether it would break the rules to have a ‘Thanks’ button which opens a custom tab to a donor web page. Staltz responded: “That's the problem: I don't know, and it's too risky to try. The link is manyver.se/donate and that page *then* links to opencollective.com/manyverse so I already have two steps of separation. Could they also ban the app just because it links to manyver.se?”

It’s clear there’s a lot of confusion about Google’s exact policy around donations which needs clearing up, but it will continue to be debated whether it’s ethical at all.