By Ryan Daws | 15th February 2019 | TechForge Media
Categories: API, Facebook, Platforms, Social media,
Ryan is an editor at TechForge Media with over a decade of experience covering the latest technology and interviewing leading industry figures. He can often be sighted at tech conferences with a strong coffee in one hand and a laptop in the other. If it's geeky, he’s probably into it. Find him on Twitter: @Gadget_Ry

Following increasing pressure, Facebook will be opening up its Ad API to increase transparency around how it serves political adverts.

A letter penned by Mozilla and its partners – which includes “technologists, human rights defenders, academics, journalists, and Facebook users” – demanded this very change. By opening the API, the coalition hopes tools can be made to analyse and counter ads used to influence politics. 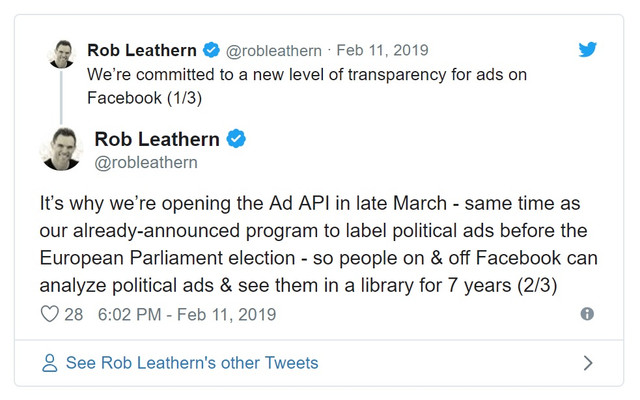 The coalition’s letter gave a deadline of April 1st, 2019 and threatened that it would “be exploring ways to hold Facebook accountable if that action isn’t sufficient.”

April 1st was set as the deadline to help ensure transparency ahead of the upcoming EU elections. Let’s hope Facebook manages it to help prevent the kind of political influencing we’ve seen in recent years on the platform.

(Photo by Tim Bennett on Unsplash)