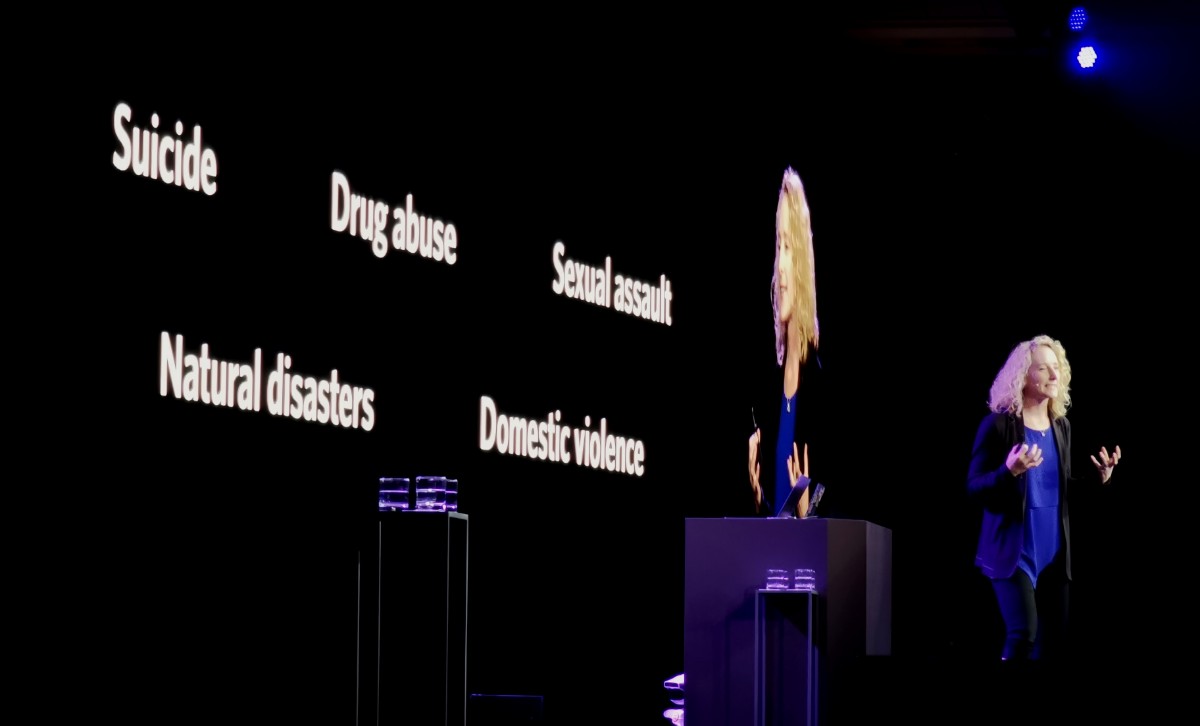 By Ryan Daws | 9th August 2019 | TechForge Media
Editor at TechForge Media. Often sighted at global tech conferences with a coffee in one hand and laptop in the other. If it's geeky, I'm probably into it.

Twilio has announced a range of internal policy changes designed to improve workplace equality alongside initiatives to support non-profits and the most vulnerable.

Very little can get done without communication, it’s behind almost everything we do. That puts Twilio in a position which Spiderman’s Uncle Ben would say: “With great power, comes great responsibility.”

Twilio CEO Jeff Lawson began his keynote setting out the company’s goal that, by 2023, his company aims to be 50 percent women and 30 percent underrepresented people (URP).

Lawson highlights that Twilio is already leading in reducing the pay gap between some parts of society and others. As of 2019, women/men pay is 100.4 percent. Furthermore, non-whites/whites are paid 99.7 percent the same. 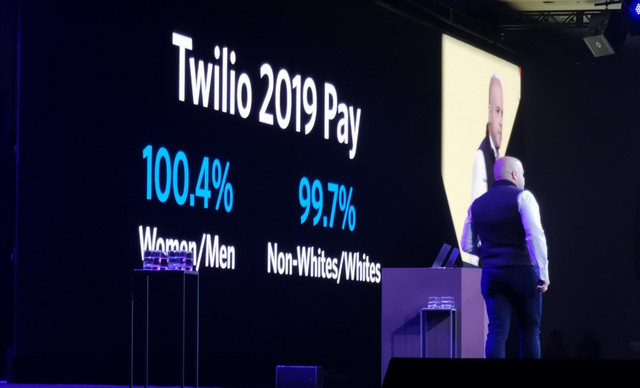 Supporting non-profits and society’s most vulnerable

Erin Reilly, VP of social impact at Twilio, took the stage to explain how the communications platform is supporting non-profits and society’s most vulnerable.

Reilly says Twilio’s goal is to “fuel the communications that give hope, power, and freedom” and over 3,500 companies and developers are using the company’s services to do just that already. 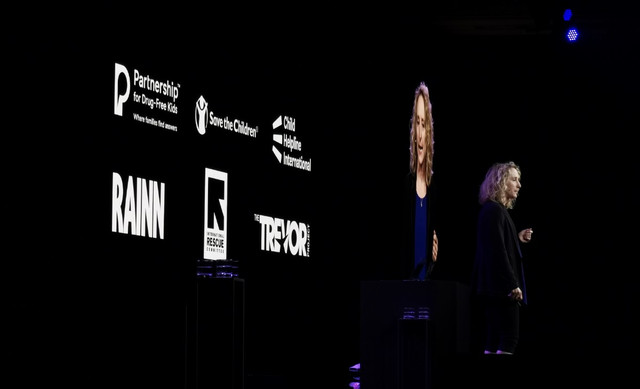 “These are organisations that are improving education, strengthening democracy, and helping people get access to food, or a home,” explains Reilly.

In 10 years, Twilio aims to help one billion people every year. Last year, Twilio estimates non-profits using its technology had helped around 25 million. A year later, that number is up to 100 million.

Mass shootings continue to plague the US, there have been two in the past week alone, and Reilly touches on how many lives are saved is often dependent on efficient communications that help to coordinate emergency responses.

Reilly tells the story of such a coordinated emergency response she first learned about after receiving an email from Trek Medics with the subject “You did this”. Reilly jokes that she opened that email pretty quick.

The email read: “This morning we received an alert of a possible child drowning in the Dominican Republic. We dispatched an emergency alert to the volunteer medics in the area and one that was right there, on that same beach, was there 50 seconds later. After performing CPR for a couple of minutes, with two other responders, they got the child’s pulse back and prepared for transport. They were at the hospital a few minutes later. The child survived, and the child was discharged later that night.”

“At that time, my daughter was two,” says Reilly. “I looked at the screen and I saw this razor’s edge; on one hand, that mother could have gone home that night in darkness and loss. But instead, her child was home safely tucked in bed that night all because Trek Medics was able to send the right message, at the right time, to the right people.”

“Our job is to help non-profits use communications to help scale that important work they’re doing every day.”

Twilio works closely with a lot of non-profits, one is anti-sexual violence organisation RAINN.

Keeli Sorensen, VP of victim services at RAINN, took the stage to highlight the sickening scale of sexual violence and how RAINN is using Twilio’s services to help give a voice to victims. 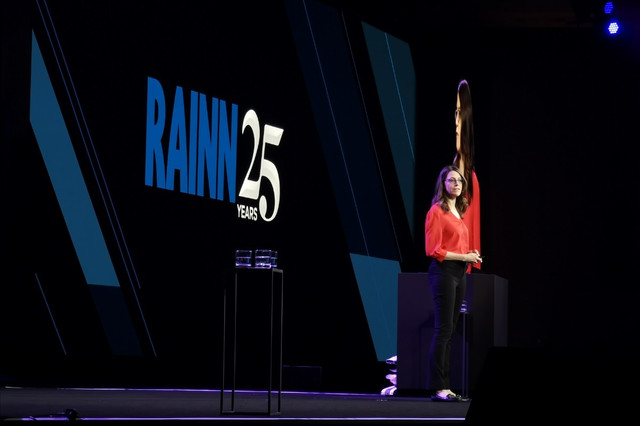 "These technologies have made it possible for our staff to provide survivors with emotional support, develop safety plans to leave abusive environments, and learn ways to report their assaults to law enforcement.”

Sorensen says RAINN has helped over three million people over the past 25 years. Every 92 seconds, another person in the US is sexually assaulted; which Sorensen highlights means another five people by the time she leaves the stage. Thanks to movements like #MeToo, however, more brave people are choosing to step forward with their experiences.

Getting people to that point where they can speak about their experience can be a difficult task due to the violation of trust they’ve often already felt. Many victims are also aware they’re living in a world where privacy is often not respected, and data is up for grabs.

“Imagine what it’s like for a child whose abuser is in the other room and needs to figure out how to get help,” comments Sorensen.

RAINN first launched its hotline over a decade ago but says it’s committed to technological innovation to help people in new and improved ways.

This past January, RAINN launched ‘Help Room’ which is a 24/7 P2P anonymous service where people can connect to one another and rebuild trust in themselves and their communities. Sorensen says thousands of people every month are already using the service.

Sorensen says RAINN is open to suggestions from those able to dream up new ways to support people and ensure sexual violence becomes “a thing of the past”.

“As tech professionals, I want you to know that your work is helping tens of thousands of people all the time,” says Sorensen. “Thank you for that.”

Reilly retakes the stage to explain how Twilio is launching new initiatives to support organisations like RAINN. One such effort announced during the conference is the Crisis Response Technology Network (CRTN) which aims to bring together organisations that can deliver crisis response communications at scale.

Current members of CRTN include:

The CRTN members will meet quarterly and will also help to ensure non-profits are receiving enhancements to – and maximising – the use of Twilio technology.

“More and more nonprofits are using Twilio’s technology given the important role of communications in life and death situations,” said Reilly. “Nonprofits want to deliver the right message at the right time to the right person, all at the scale of the problem they’re tackling.”

“They are the experts in changing people’s lives, and we want to help them expand their reach to even more people. We’re looking forward to working even more closely with leading organisations that have been supporting people in times of crisis for decades.”

Alongside the CRTN, Twilio is launching a $5 million grant for non-profits globally working in the following areas:

Nonprofits can submit applications for the grants at the Twilio.org website.