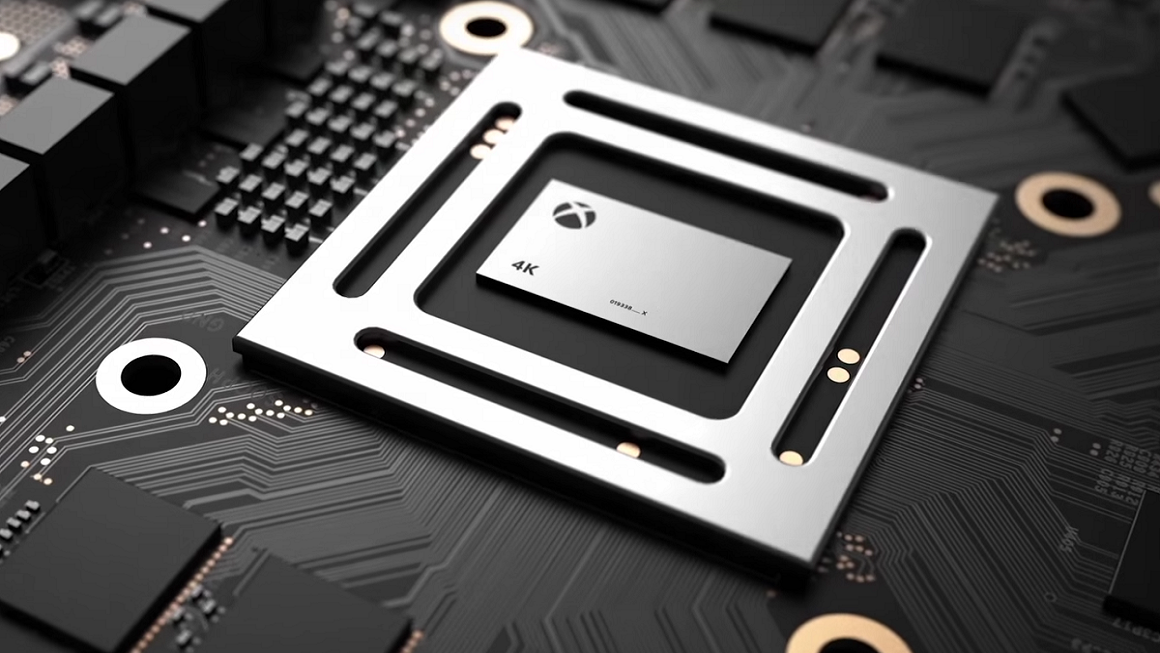 By Ryan Daws | 12th April 2017 | TechForge Media
Editor at TechForge Media. Often sighted at global tech conferences with a coffee in one hand and laptop in the other. If it's geeky, I'm probably into it.

It's no surprise the Xbox team are working on VR – we've heard for a long time now the company has plans – but we've been left to piece together bits of information to speculate on the details.

AMD’s Corporate Vice President, Roy Taylor, may have slipped up today in announcing the company's partnership with Microsoft on VR for Xbox. While speaking of his company's past work with Sony on PSVR, Taylor also said: "and with Xbox in the future."

After Oculus started bundling Xbox controllers with their headsets, there were murmurs the giants were close to securing a deal for an Xbox VR headset. Taking into consideration Oculus’ relative leadership in the PC gaming space, and the ever closer union between Xbox and Windows 10, it seemed a natural partnership. There have been no recent updates on that front, however, and I've heard suggestions the deal collapsed.

Comments made by Xbox chief Phil Spencer last year revealed there were no current plans for a first-party headset, but at the time it was thought Microsoft was still close to securing the aforementioned deal with Oculus to manufacture a HMD for Xbox as a third-party. For something as important to Scorpio's success as VR, the company may want more control over the process to ensure it offers a high standard. I wouldn't rule out a HMD built in-house, even if its purpose it more to serve as a reference to other manufacturers like Surface to PCs and HoloLens for AR. With the Xbox family running Windows 10 under the hood, I'd primarily expect Microsoft to license manufacturers to build VR headsets for Xbox which will also be compatible with PC and vice-versa.

The only solid confirmation we've had from Microsoft about their VR plans on Xbox is for AR and the mixed-reality headsets which enable it. In this press release earlier this year, we have confirmation from Microsoft that it will support headsets from a range of manufacturers on both Xbox and Windows 10.

It seems odd that despite Microsoft's own mixed-reality headset, HoloLens, arguably leading the way in the space, it's not mentioned in the release. We've seen HoloLens being used for gaming such as in the impressive Minecraft demo, but it was reiterated to me that Microsoft's current focus is for commercial and not consumer deployments of its own AR headset.

Microsoft is foremost still a software company, but sometimes it needs to step in with hardware to show other manufacturers how to meet its vision for the future of computing. We've seen this with Surface inspiring similar designs from others in the PC space, and we're seeing it with HoloLens for AR.

AMD is experienced with VR. Not just from supplying and optimising the chips and software for PC gaming, but the company also powers PlayStation VR. From working so close with Sony on PSVR, I get the impression AMD has learned some lessons about what works and what doesn't to take into account with future initiatives. The confirmation of AMD's involvement with VR on Xbox allows us to make some informed speculations…

One of the biggest issues consumers have with today's VR is the wires. Once thought to be necessary to keep latency down, AMD, through its recent acquisition of Nitero, has managed to eliminate noticeable VR streaming latency using 60GHz wireless (based on 802.11ad wireless) in combination with advanced phase array beamforming technology. The company says that wires “won't be tolerated” after. Following such a bold statement, it's unlikely that any VR product AMD is involved with is going to have wires. Xbox VR, I would almost guarantee, is going to be wireless. “Wires are an inhibitor to what should give freedom of movement – it’s important one of the next things we do is get rid of the pesky wires,” says Taylor. 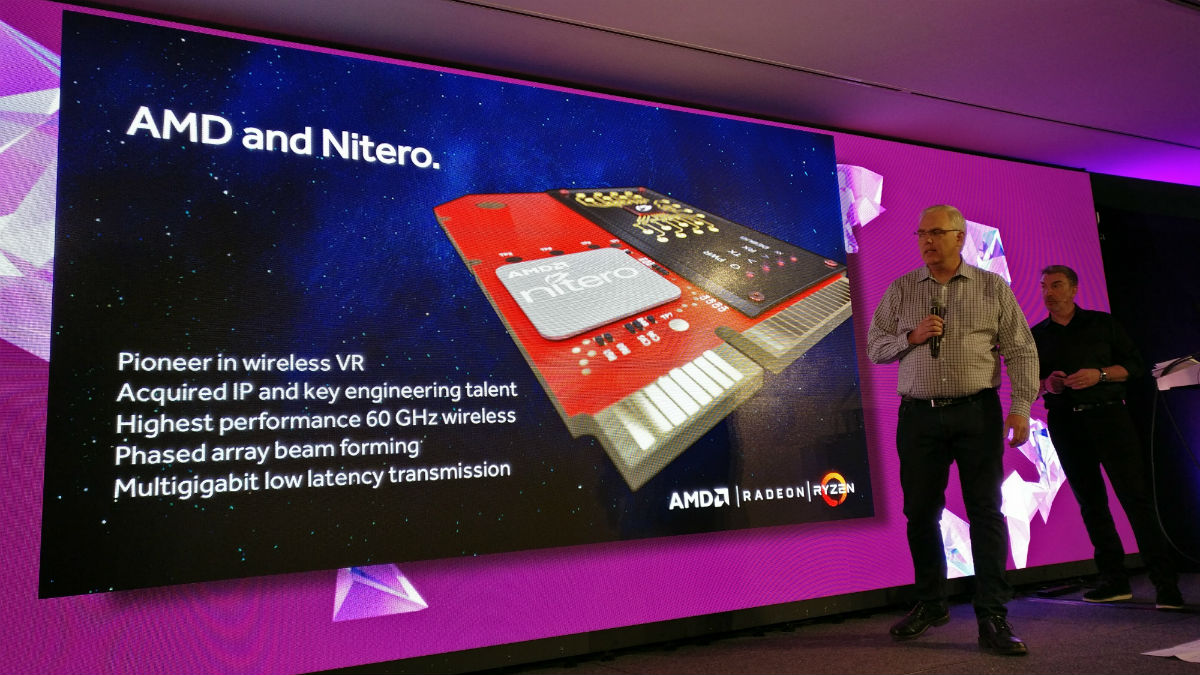 There's some uncertainty over what's going to happen with VR and the original Xbox One. Under current plans, titles released for the upcoming Project Scorpio console need to also be released for the original console. Even the PS4 Pro struggles with high-fidelity VR content, so I'd suspect VR headsets will only be available on Xbox consoles post-Scorpio and therefore VR titles will be exempt from this rule.

On power, Taylor emphasised that only now is technology reaching a point to realise the vision for VR. In fact, he urges creators not to focus on what can be achieved now on a target computer, but what it can render by the time you bring it to market.

The relationship with Bethesda seems to be close at the moment following Xbox's more flexible approach to Fallout 4 and Skyrim mods.

Much was made of “the cloud” when the Xbox One was launched and it’s yet to be fully utilised. A big part of this is the lack of a definitive title which shows its capabilities. With Crackdown 3 upcoming, that could arrive sooner rather than later. Two years ago, I speculated Cloudgine would provide cloud processing capabilities for Xbox games and it was confirmed the following month. I believe we’ll see cloud-based processing used for VR – perhaps not this year – but in the coming years to help increase performance beyond what local hardware allows.

Taylor provides the example of an incredible scene in Gladiator which, he says with a sigh, would be completely impossible to create in VR today. “You can have really high graphics, but then your frame rate is going to go down. You can’t do that. Frame rate must stay high, or you feel sick,” he says. “We don’t have enough horsepower to run everything at 90 FPS with lots of entities and high fidelity.”

“New, low-level APIs like Vulkan and DirectX 12 will allow us to take advantage of CPUs which have more cores and threads. Simply put, an eight-core CPU will put more into a virtual reality scene than a four-core. They’ll provide more entities, and the GPUs we provide will allow us to draw them and make them look beautiful.”

Fierce competition between players like AMD, Nvidia, and Intel will rapidly increase the local performance of hardware, but I expect cloud processing will have its part to play. Microsoft is in an advantageous position when it comes to cloud computing due to the flexibility of running its own global business with Azure – only rivaled by Amazon and Google.

AMD partnered with Bethesda in the ‘biggest hardware/software partnership in history’ on a multi-title deal which includes Fallout 4 VR due later this year on PC and, from there, it was only natural to expect a port to Xbox VR. “This will be the title that changes an industry,” comments Taylor. “This will be the Mario, the Sonic the Hedgehog… the title which changes how we think about games in virtual reality.”

It could still happen, but there’s a noticeable lack of announcement for PSVR at this point. If I was a betting man, I’d wager an exclusive announcement during Xbox’s E3 conference this year. During a pre-E3 show last year, Todd Howard, Director of Bethesda, said: "We’re moving Fallout 4 to VR, and to have a console that can support that, at the resolution and speed that we really want, I think it’s gonna be magical."

The relationship with Bethesda, in general, seems to be close at the moment following Xbox's more flexible approach to Fallout 4 and Skyrim mods. PlayStation releases, however, are described as being not 'quite as special' due to stricter rules.

With the Xbox family running Windows 10 under the hood, I'd expect Microsoft to license manufacturers to build VR headsets for Xbox

If a port to Xbox were to happen, you can expect Fallout 4 VR to be using the DirectX 12 low-level graphics API and it will likely be a Play Anywhere title. Microsoft would appeal to both developers and consumers with such a move and display how Windows 10 is breaking down the barriers between PC and console in a unique way.

Although not specific to VR on Xbox, it’s worth noting how movement is being addressed in VR. AMD highlights a company known as Servios who has developed what it’s calling ‘Fluid Locomotion’ which uses natural hand movements – as if you were running for example – to propel yourself forward within a game without moving anywhere in real life. “You can leap, you can walk, you can run, you can duck, you can roll, and I can tell you if you’ve not tried it, it’s completely intuitive,” comments Taylor. You’ll be able to demo this yourself in a game Servios is releasing called ‘Sprint Vector’.

To sum-up my speculation – I believe a Xbox VR headset may still be created in-house to set a standard, but any licensed devices will use AMD's technology. I can almost guarantee it will be wireless. VR headsets will only be available on Project Scorpio due to power constraints and therefore developers of virtual reality titles will be able to bypass the rule of releasing on both Xbox One and Scorpio. Fallout 4 VR will make an appearance during Xbox’s E3 conference and it will be a ‘Play Anywhere’ title exclusive to PC and Scorpio. Over the long-term, VR will make use of cloud processing to improve rendering over local hardware capabilities alone.

A final reminder, this is speculative based on comments from Microsoft’s partner on VR. One thing is certain, this will be an exciting year for VR, and I look forward to being proven right, or wrong, on any or all of my theories.

What are you expecting from VR on Xbox? Let us know in the comments.