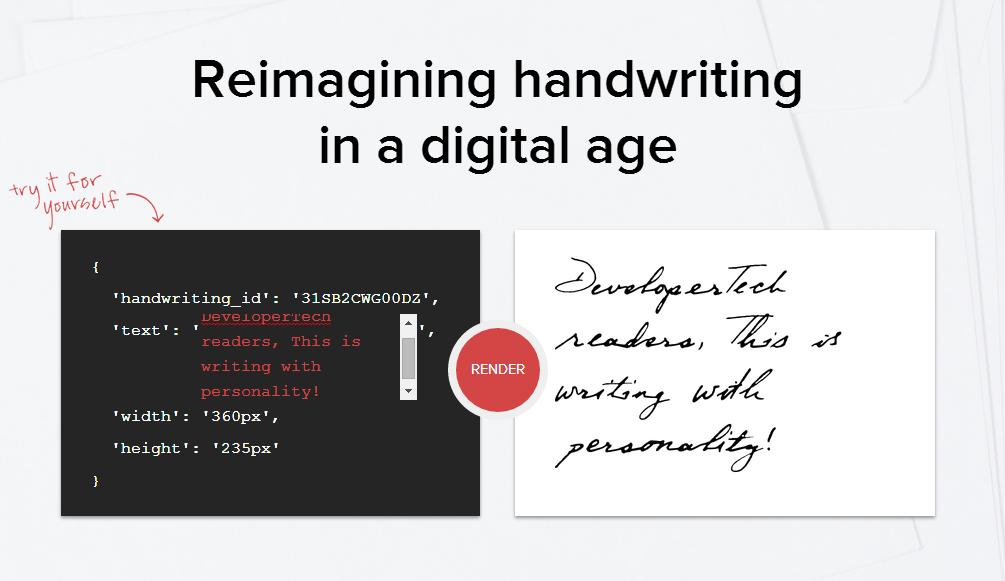 By Ryan Daws | 15th June 2015 | TechForge Media
Editor at TechForge Media. Often sighted at global tech conferences with a coffee in one hand and laptop in the other. If it's geeky, I'm probably into it.

Eloise specialises in digitising anyone’s handwriting to merge the benefits of digital with the personal touch of an individual’s handwriting. Through creating a custom style, you can type your message and Eloise will recreate your own handwriting with an insane amount of accuracy.

Instead of creating a consumer product, Eloise is going the API route and targeting developers

Furthermore, every message is individual thanks to small differences each time in lettering and spacing. If like me your handwriting skills aren’t something you wish to show-off; Eloise offers tools to enhance your scribbles a bit and provide a touch of elegance (at least it’s not as deceiving as re-touching photos in Photoshop!)

Last year I picked-up Samsung’s Galaxy Note 4 and quickly realised I’d all but lost the ability to physically write. In this digital world there is less need to put pen to paper – which is a shame because there is little that is more personal than handwriting.

There is of course a valid reason as to why we are going digital, and that’s mainly for time-saving reasons. Our increasing workloads leave us little time for our personal lives as it is; so penning a message by hand each time we need to send one to someone just isn’t a feasible option.

Merge the benefits of digital with the personal touch of an individual’s handwriting.

During the initial stages of Eloise’s development, digitising a person’s writing took around three hours which is far too long with our aforementioned fast-paced lifestyles. Now, Eloise can digitise handwriting in just ten minutes thanks to recent algorithm enhancements.

Instead of creating a consumer product, Eloise is going the API route and targeting developers to add their abilities to various applications. An early-focus for the team is for gift registries, greeting cards, ecommerce, CRM, direct mail, and Instant Messaging.

To get started with Eloise’s handwriting API, head here for more information.

Do you think Eloise can modernise handwriting? Let us know in the comments.