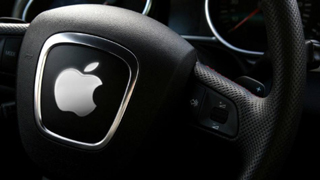 By Ryan Daws | 3rd March 2014 | TechForge Media
Editor at TechForge Media. Often sighted at global tech conferences with a coffee in one hand and laptop in the other. If it's geeky, I'm probably into it.

With a simplistic and recognisable iOS UI, ‘CarPlay’ is designed “from the ground up” to provide a seamless experience between phone and vehicle.

Offering both touch and Siri voice-control to navigate smartphone services; it will provision access to contacts, voicemail, notifications, map directions and music queuing — it even includes support for select third-party apps like Spotify and iHeartRadio.

A dedicated control to activate Siri from the steering wheel will help prevent distractions whilst driving. Yet, there are plenty of users who will be hoping for improved speech recognition in the next iOS update– or there are numbers which might well end up reverting back to touch controls…

Apple VP Greg Joswiak said in a statement. “iPhone users always want their content at their fingertips and CarPlay lets drivers use their iPhone in the car with minimized distraction.”

As expected, only iOS devices will get support CarPlay – but still only limited handsets. All of the Cupertino company’s latest ‘Lightning’-connector iPhones will be able to use this new system; but iPad tablets and older 30-pin connector iPhones will remain left out of this exclusive drive club.

In an unexpected move, iDevices will not work wirelessly with CarPlay. An obvious assumption is that battery-life conservation is the culprit; with wireless streaming sucking up juice on devices which are oft-criticised for their less-than-stellar usage time.

During Geneva Auto Show this week it’s expected we’ll see the first three mentioned manufacturer’s attempts to woo us towards a new iCar purchase from their respective line-ups.

Microsoft, BlackBerry and a host of other companies have highlighted in-car systems as important to their future, whilst chipmakers Nvidia and Qualcomm also specify the connected car as a key growth area…

But it’s Google that, as usual, Apple needs to keep a close eye on. Just under two months ago DeveloperTech reported on the OAA (Open Automotive Alliance) which consists of; Google, GM, Audi, Honda, Hyundai and NVIDIA.

Together these giants aim “at accelerating auto innovation with an approach that offers openness, customization and scale.” Considering Android’s near-70% market share and the versatility offered by Google’s open OS to manufacturers – it’s like to be an attractive proposition.

What do you think about Apple’s CarPlay? How about the market competition?