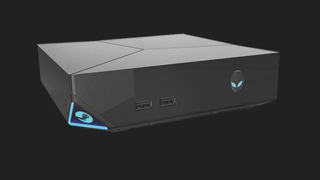 By Ryan Daws | 7th January 2014 | TechForge Media
Editor at TechForge Media. Often sighted at global tech conferences with a coffee in one hand and laptop in the other. If it's geeky, I'm probably into it.

PC sales are on a serious decline, you may have heard. After all, for most, their functionality can be replaced by that offered in more convenient forms such as netbooks and tablets. BBC, for example, only announced today that iPlayer tablet viewing overtook computer for the first time.

Of course there are professional applications which require the (higher-end) desktop; but this is a smaller market than your general consumer and Microsoft’s efforts to adapt haven’t been the most successful.

Where PCs have always found a safe home for in the consumer is for the serious gamer. A market which many called “under threat” by Valve’s recently announced Steam Machines; the upgradeable PCs which sit under your TV and run the aptly-named Steam OS.

At CES 2014, we were treated to a whole host of these Steam Machines – with 14 manufacturers set to release their own consoles this year.

Yet thankfully for Microsoft, most of these OEMs have said they will be shipping Windows with their new systems as a dual-boot option – effectively putting Windows on the TVs of most Steam Machine buyers.

Windows 8, provisioned on the TV by Microsoft’s Xbox One console, was built with the vision of providing a “Modern UI” which is familiar, usable, and compatible regardless of what form factor it is used upon. This vision come under-fire from traditional “keyboard and mouse” users who found the OS difficult to navigate intuitively without a touchscreen.

Despite Microsoft listening to their customers’ frustrations – fixing many of them in the OS’s first major “8.1” update – many had already abandoned the OS in favour of Windows 7. This previous version continues to grow primarily due to support for Windows XP being scrapped in April 2014; with businesses rushing to upgrade before their systems are outdated and security vulnerable.

Windows 8 is a radical overhaul of an OS which has remained familiar since the beginning. With the traditional “desktop” just a click away, and offering more applications than the currently-limited Windows Store, many do not see the virtues of using the new design.

The more Microsoft can get their OS to be seen, the more they can display its overlooked benefits. It’s by no means a lifesaver, but it’s certainly a lifeline for Windows which may give Microsoft time to re-work and show they will remain relevant over the next decade in face of stiff competition.

Google’s Chrome OS may still be in its infancy, but according to an NDC study it has already claimed 9.6% market share. Devices are cheap, and out-the-box capable for most daily tasks. Whilst Chrome applications are currently limited; if Google chooses to open the OS to native Android apps it would add a vast and varied library for its users.

But perhaps the biggest opponent of Windows is the open-source Linux; on which Valve’s “Steam OS” is based. It’s free, powerful, rapidly-expanding, and now caters for gamers. In fact, Google’s Android mobile operating system is also based upon the Linux kernel.

What Linux doesn’t provide is a controlled and consistent ecosystem due to its variety of distributions. Microsoft has been working hard on a suite of applications such as Office 365, Xbox Music, SkyDrive… which work seamlessly across Windows-based devices.

Windows Phone struggled to gain much momentum until recently; where a latest study shows the OS growing fairly rapidly in every region over last year – cracking the 10% market share milestone in Great Britain (highest is 16% in Italy.)

Do you think Steam Machines could actually help Windows?