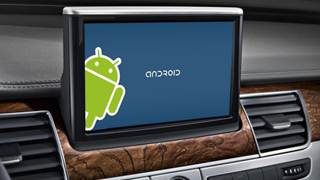 By Ryan Daws | 6th January 2014 | TechForge Media
Categories: Android, Development Tools, Platforms, Testing,
Ryan is an editor at TechForge Media with over a decade of experience covering the latest technology and interviewing leading industry figures. He can often be sighted at tech conferences with a strong coffee in one hand and a laptop in the other. If it's geeky, he’s probably into it. Find him on Twitter: @Gadget_Ry

When talking about platforms with yet-untapped potential; most will include the car. Many of us spend a great deal of time in our vehicles commuting, for work or pleasure, and the technologies which follow us to improve or ease our experiences are the most appreciated.

Google’s Android OS is already found in almost every variation of device possible; from the smartphone, to consoles, to cameras, to espresso makers.

Now thanks to the ‘Open Automotive Alliance’ – which consists of Google, GM, Audi, Honda, Hyundai and NVIDIA – we could finally have a fully-realised platform “under the hood” for developers to start tinkering with and provide innovative applications.

According to Google, the new alliance is “aimed at accelerating auto innovation with an approach that offers openness, customization and scale”. Pretty much a roundabout way of saying all of Android’s virtues — really.

Patrick Brady, Director, Android Engineering writes: “In this multi-screen world, switching between our different devices should be easy and seamless. Common platforms allow for one connected experience across our phone, tablet and PC, so we get the right information at the right time, no matter what device we’re using.”

It’s a vision being chased, yet mainly unrealised, by all the major platform players. Apple announced last June at the company’s 2013 developer conference that it will be integrating iOS into the car dash with support from BMW, Mercedes-Benz, GM and Honda.

This, however, looks primarily to be an extension of your phone to receive calls and messages in a familiar interface; rather than iOS applications built specifically for the car.

Microsoft on the other hand has been quiet on any vehicle integration; but has worked hard on providing a consistent “Modern UI” which scales and is familiar across its currently featured forms; desktop, mobile, and console.

Notably missing from the support line-up for either the Android or iOS in-car implementations is vehicle giant Ford — who have their own proprietary ‘SYNC’ system. Whether Ford can continue to offer an attractive proposition in the face of the versatility of Android; remains to be seen.

With Google currently testing self-driving cars, and joining the OAA, it’s clear the giant certainly sees your ride as the next lucrative platform.

What do you think about Google’s play into the vehicle app market?