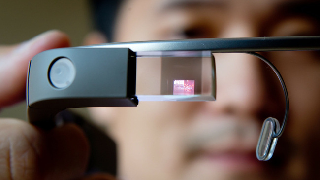 By Ryan Daws | 26th February 2014 | TechForge Media
Editor at TechForge Media. Often sighted at global tech conferences with a coffee in one hand and laptop in the other. If it's geeky, I'm probably into it.

Whilst Glass is fantastic technology, it will only come into its own with the right applications. Blippar, the augmented reality experts, has defied many critics and shown – for the very first time – 3D AR running on the glasses…

Critics have pointed out Google Glass’ low-processing capabilities; questioning whether the device is capable of processing data fast-enough to enable true AR. Blippar took the sensible approach in solving this problem by looking to the Cloud for handling the heavy work.

Earlier at the “Mobile Innovation 2024: The Future… What’s Next?” event, Genevieve Bell from Intel said: “Wearables only truly succeed when they do the things we care about; that matter to people. That’s not just about making it work, but making it meaningful.”

Blippar’s CEO, Ambarish Mitra, took the opportunity in his first demo to show how AR in Google Glass can do the things people care about – not just the gimmicky tricks we’ve seen from many companies. He showed how your everyday magazine reader could look at a segment and pull a video from it which plays full-screen; making the experience both enjoyable and seamless.

For a second demo he showed the possibilities for more niche cases by looking at the model of a dinosaur; with the ability to look around at the details and move closer or further away as needed. The potential here, especially in the medical field, is quite literally clear to see.

As a final show-off, Mitra turned mainly to the gimmick in a knowing bit of fun. Through looking at a person’s face he was able to throw gunk at their face (virtually!) which also displayed Blippar’s near-flawless recognition; remaining there even when looking away and back again.

It was a very impressive demonstration; and one which undoubtedly reinvigorated faith in useful augmented reality applications which had been lost through previous cumbersome approaches.

The demo made use of the exhibition’s (naturally-patchy) WiFi and still managed to perform without the usual demo-fails you come to expect. Whether it will hold-up the same on mobile networks once many more of us start getting Glass to replace our now very boring specs today; is another question – but the future looks bright for Google Glass 3D augmented reality…

Do you think Blippar’s 3D augmented reality will be an important factor in consumer’s purchase decision? How about the impact on brand’s marketing?

You can get building AR experiences today using the “BlippBuilder” here.