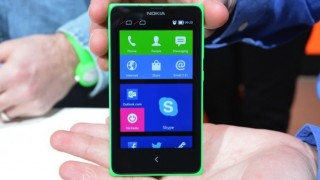 By Ryan Daws | 25th February 2014 | TechForge Media
Editor at TechForge Media. Often sighted at global tech conferences with a coffee in one hand and laptop in the other. If it's geeky, I'm probably into it.

CEO Stephen Elop, and a host of other high-level execs from the company, took the stage at Mobile World Congress today for Nokia’s “Developer Day” with a foremost aim of clearing up any residual confusion around the firm’s new play into Android; and reaffirming how Windows Phone developers are still getting world-class support…

Their first handset is the ‘Nokia X’ which – despite the flagship sounding moniker – is an entry-level affair for those who want a cheaper smartphone.

Google’s Android benefits from no license fee; making it cheap for manufacturers to bring devices to the market. Combine this with Nokia’s unparalleled distribution and distinct designs; you have a combination which can appeal to anyone in the market.

Elop opened the stage by saying: “We believe Nokia X will win customers hearts. It has Nokia’s design quality and reliability. HERE experiences like maps and radio. Access to Skype, Outlook, and OneDrive. And the familiar live tiles found on Windows Phone.”

It’s the highly-skinned version of Android and distinct lack of Google apps (all have been stripped and replaced by Microsoft’s services…) which displays the clearest message that this device was built to be a Trojan horse – and Windows Phone is still Nokia’s commitment.

By expanding the market to new people and helping them experience Microsoft’s services, owners may choose the full Windows device on their next upgrade. More importantly, especially for Microsoft, it can hook developers into creating for Windows…

As Elop says: “People are realising the potential for a converged Windows ecosystem. You can re-use a lot of code across these different platforms.”

He also sums up the Android strategy: “Nokia X becomes a feeder system for Windows Phone.”

Whilst Android apps can be run on the Nokia X, they’ll have to come from the Nokia Store or a third-party app store… Google’s Play Store is obviously not an option here.

Current developers on Android can benefit from the Nokia ‘X’ software platform simply by dropping their current app into the Cloud-based Nokia X Analyzer tool. 75% of Android apps will “just work” without any modifications and can be instantly distributed to the Nokia Store and others. Those which require some changes will be alerted to what needs doing and can be made ready within a few hours.

This links to Nokia’s announced DVLUP program which rewards developers for completing app challenges with items or free app promotion.

Bryan Biniak, VP of Developer Experiences, said: “We have been working really hard to help you.”

“We’ve got guys on the ground in over 60 countries around the world working with developers to make sure they sell.”

Biniak gives an example of the popular app ‘JobLens’ which Nokia’s local team helped customised in various markets around the globe to offer concise results and an overall great user experience which helps the application to succeed. He says the app has helped find jobs here in Spain where there’s a high unemployment rate.

As an example of the new tools Nokia brings to assist developers create better experiences; a new imaging SDK is announced but with little details – only that its common codebase will work across Windows and Windows Phone.

Nokia’s dev exchange allows direct-access to the Nokia Store which allows for quicker updates; and promotion will also be handled on your behalf.

Timo Toikkanen, EVP of Mobile Phones, says about Nokia’s future: “If we look at 2014 and beyond, our starting point is very strong. We are the largest player globally. We’re the largest device OEM in the world; shipping 200 million last year. We are also the leading brand for affordable smartphones…”

He continues: “We may have taken a battering in the Western markets’ but in emerging markets we’ve continued to be strong and giving competition a run for their money.”

Amit Patel, VP of Developer Relations, talks about Nokia’s unmatched support for these emerging markets with the largest operator billing – available in 60 countries with over 160 operators. Most people in these markets don’t have credit cards; making it the only method of payment.

What do you think about Nokia’s developer support?