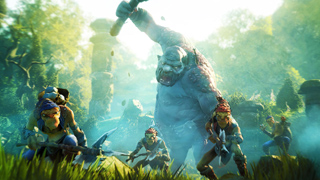 By Ryan Daws | 12th February 2014 | TechForge Media
Editor at TechForge Media. Often sighted at global tech conferences with a coffee in one hand and laptop in the other. If it's geeky, I'm probably into it.

Game development is a beast more fearsome than anything you’ve faced in-game, but done right, and the loot is far-higher. Currently the highly-talked about (and opinion-divisive) trend is that of ‘Freemium’ – the act of releasing a game for free and monetising through in-app purchases.

But what is next? Highly-respected studio and ‘Fable’ developer, Lionhead Studios, clearly thinks it’s “Games-as-a-Service”.

Like PaaS (Platform-as-a-Service) and SaaS (Software-as-a-Service) which are both hugely important services in the enterprise; GaaS could be for gamers.

In an interview with Edge magazine, Lionhead’s new CEO John Needham said: “I think the real magic in the industry now is taking great traditional gameplay and IP, and this new connected world, and mashing them together.

I am the person pivoting Lionhead into a games-as-service studio.”

So what would GaaS entail? It could be likened to how MMO games such as World of Warcraft and EverQuest have worked for years. Content is consistently built and added to expand the universe from one core game… but that core needs to be solid.

To spend all of a studio’s development time and money on a single franchise is a big undertaking and one which needs to be consistently funded; most likely through a monthly subscription.

In the case of the upcoming Fable game, Fable Legends, Needham says: “It’s a long-range plan, of five to ten years, where we’re going to build and keep building onto Fable Legends. That’s the nature of games as a service – you keep adding systems and features and content.”

But Lionhead isn’t the only big studio hoping to expand their franchise into a long-term, ever-expanding “platform” as such. Bethesda is taking their Elder Scrolls series online for the first time this year in the aptly-named ‘Elder Scrolls Online’.

Whether gamers will want to stick (and continue paying) to stick in a single franchise’s universe for the long-term without their attention being drawn to another – is a question yet to be answered. It works for current MMOs, but very few players will subscribe to more than one at a time… if GaaS becomes a trend, and gamers are asked to subscribe to each of their games, it may be a different story.

Nintendo’s exclusive franchises have kept the company going strong for many years; but with the WiiU’s lacklustre uptake; it shows gamers can easily be drawn to others…

Do you think GaaS could become the next big trend in gaming?