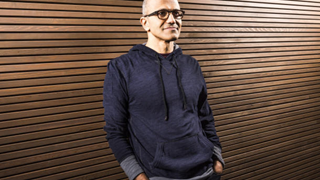 By Ryan Daws | 6th February 2014 | TechForge Media
Editor at TechForge Media. Often sighted at global tech conferences with a coffee in one hand and laptop in the other. If it's geeky, I'm probably into it.

When Steve Jobs was unceremoniously kicked from Apple; it began a serious decline which appeared unrecoverable…

Whilst Bill Gates wasn’t kicked from Microsoft, instead leaving of his own accord to focus on his ‘Gates Foundation’ philanthropic work, the company has since been losing touch and failing to take advantage of new market opportunities – most notably, mobile.

Many have put this down to the leadership of one Steve Ballmer; whose love of the company he’s re-iterated on many occasions. He’s known as more of a sales guy, than a computing major, and this has likely led to the — out-of-touch with developers — image that Microsoft has gained in recent years.

Combined with his belief that Microsoft, as the biggest PC manufacturer, was untouchable – in the same respect as BlackBerry – it has ultimately started to lead to its downfall in this “post-PC” era.

The PC will survive. Let’s get that out of the way first. Gaming is hugely popular on PCs, and there are many applications such as video editing and detailed 3D modelling which just isn’t possible (on the same level) as the desktop.

But it will be on a serious decline, your average consumer can do all their basic needs (Web browsing, word processing…) all on their iPads. Microsoft has to innovate. It needs a figure at the helm in-touch with developers that serve them, can seize opportunities, see new ones, and ultimately just understand the market.

Whilst Satya Nadella may have been named CEO, you can bet Bill Gates will be the power behind the throne – at least to begin with. But Satya alone is capable of rallying the troops and leading Microsoft into their next-generation…

SweetLabs co-founder, Chester Ng, said: “It’s refreshing to see Microsoft put a leader in place who actually has been a developer and built developer platforms, especially for a company like ours who has made a living helping developers on Windows.”

Bill knows products, computers, and the market he’s served passionately for many years. Satya knows modern computing, the Cloud, mobile, enterprise, developers… to sum up, he’s got experience in just about every area relevant today; plus approachability and charisma (he’s even fine with rocking a Zuckerberg-esque hoodie!)

A (now famous) quote from Nadella reads: “Our industry does not respect tradition — it only respects innovation.”

This shows Nadella gets it. He’s not stuck in the past; he’s looking to the future. But the fact is, Microsoft has never stopped innovating – take a look around their research labs to see that. It’s truly a wonder emporium, a techie’s playground, of things which has never reached the end-customer… a lack of communication between teams and failed leadership appears to be the only feasible cause.

Working across a variety of departments at Microsoft, and being highly-respected, give me no doubt that Satya can actually make good on Ballmer’s “One Microsoft” strategy of getting the various teams to work tightly together to achieve goals – something said previously to be difficult.

But let’s not forget Gates, he, like Jobs was, is a visionary able to dream big and take chances. From the very beginning Bill stated Microsoft’s goal of “a computer on every desk and in every home” at a time when the company had shifted barely zero. Now Microsoft software is on most people’s computers, on ATMs, on medical systems… it’s everywhere.

Missing taking advantage of mobile was Microsoft’s biggest slip-up, which is frustrating, as they were there with; Pocket PC, Windows CE, Windows Mobile – all these systems which just missed the mark. Then Apple revealed the iPhone, at which Ballmer famously laughed, and well, it was history in the making…

At the time, Ballmer was almost right to laugh. Here was an expensive device unable to run applications other than those built by Apple at launch (crazy to think now!) But what he couldn’t see was the future-potential…

Now here’s Microsoft today, trying an ambitious strategy for one OS across devices, yet failing to deliver that promise to provide one platform for development to developers – and annoying consumers with an interface (at launch) which seemed to forget people still do use desktops.

If Satyill (the killer Satya and Bill combination) can get Windows, Windows Phone, and Xbox teams in particular to work together… then by the time Windows 9 rolls round, we could have promises fulfilled, and a cross-device platform which developers have dreamed of.

Combine this with releasing some of the in-house innovation being cooked up within Microsoft Research, deeper-participation in Open projects, Satya’s understanding of the importance of the Cloud…

… And I think Microsoft could be the post-NeXT Apple success story repeated.