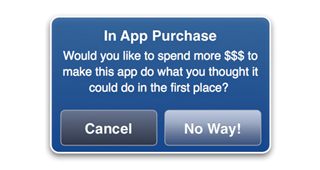 By Ryan Daws | 16th April 2014 | TechForge Media
Editor at TechForge Media. Often sighted at global tech conferences with a coffee in one hand and laptop in the other. If it's geeky, I'm probably into it.

Have you noticed the rise in applications making use of in-app purchases? A new report from VentureBeat Intel shows these developers have good reason to implement them; after all, they are by far the most lucrative method of monetisation.

The report collates data taken from 176 various developers across 1,000 different games to get a clear idea of how others can profit from their works.

It takes into account the cost-effectiveness of implementing the various methods alongside its popularity. Certain monetisation methods are less popular but also effective. These include; text walls, app walls, in-app promotion of other apps, and offer walls (the option to accept an offer which generates revenue for the developer.)

Paying for a download upfront is now among the least popular and less cost-effective form of monetisation. This isn’t surprising since the free-to-play model now accounts for 81 percent of revenue on Apple’s US App Store, and even more internationally.

More traditional advertising methods such as banner and video ads are still both popular and cost-effective for the effort. Despite this, further results show the smallest amount of revenue gained from these strategies…

In the same way, this could be the reason Google was selected as the top monetisation platform. It’s probable to be the default option used by small developers who don’t have the time to use other potentially better solutions.

The report argues: “Small developers are cheating themselves by not using multiple monetization strategies from the top companies who are winning larger shares of ad revenue per user.”

You can get the full report from VentureBeat Intel for $499.

Which monetisation solution do you prefer?