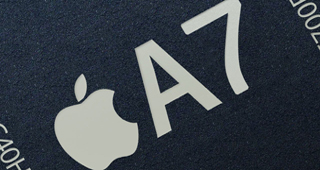 By Ryan Daws | 12th September 2013 | TechForge Media
Editor at TechForge Media. Often sighted at global tech conferences with a coffee in one hand and laptop in the other. If it's geeky, I'm probably into it.

Cupertino-based Apple doesn’t usually take a gamble when it comes to new mobile technology – but when they do, they make it work.

It happened with multi-touch; defining a new era where now almost everyone has a touch-based handset from various manufacturers.

Now it may happen again.

At their recent keynote, Apple announced the flagship iPhone 5S which came with the expected yearly speed bump. What many didn’t expect, would be the arrival of the first 64-bit processor in a consumer mobile device.

Immediately, this announcement sounds a little “off the cuff” as Android in its current form does not yet support 64-bit. iOS 7 however, was rebuilt with support in mind – but does it matter?

The main advantage of 64-bit is that it can address more than 4GB of RAM; it’s only then it actually becomes noticeably beneficial. The iPhone 5 currently has 1GB, and the 5S is not likely to have more than 2GB. Annual performance gains will come from the more optimised A7; not because it’s 64-bit.

Applications can be written now in 64-bit (which FYI can’t be used on 32-bit) but what developer is going to limit themselves to just the 5S? Especially without the performance gains (yet.)

Battery life, on 64-bit games which will likely be the key usage scenario, will be a real issue. On a device so small; you won’t really even notice the improvements if it had more RAM to take advantage of. Quite frankly, this is just overkill from Apple; wooing consumers with raw specs.

But, stick the A7 in an iPad, with more RAM, and we could be talking for usable business applications and gaming; on a device where battery life is less of an issue.

Although Samsung will do everything in their power (and in components, that is something to fear) to take on Apple at their own game. Expect a Galaxy S5 with 64-bit processor and 8GB RAM. Perhaps a tablet with similar specs even sooner – I’d get hurrying with that iPad 5, Apple…

Especially with Android 5.0 looming and ARM to unleash its Cortex-A57 and Cortex-A53 processors.

What do you think about the 64-bit architecture in Apple’s iPhone 5S?