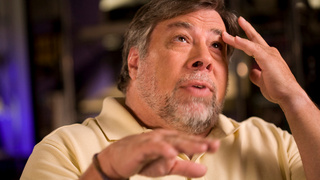 By Ryan Daws | 23rd October 2013 | TechForge Media
Editor at TechForge Media. Often sighted at global tech conferences with a coffee in one hand and laptop in the other. If it's geeky, I'm probably into it.

Speaking at AppsWorld in London, Apple co-founder Steve Wozniak gave his thoughts on the shifting mobile industry; wearable tech, connected devices, voice assistants, the Cloud, and the iOS competition from rivals such as Android and Windows Phone.

On talking about who’s “doing the most” for mobile; Woz is still on the iOS-side of the fence for reasons of reliability. Whilst this may not necessarily be a surprising stance from an Apple founder – Steve is a man unafraid to criticise the company he helped build.

He admires the competition drive by Google’s open-source OS, Android, and was quoted as saying: “It came to the Galaxy S3 and the Note and I said… these are pretty good!” Whilst his “eye is often drawn to the big, glowing screens” by the likes of the HTC One and Galaxy S4.

When asked if he’d like to see a larger iPhone – it was a certain ‘yes’ – with the sentiment echoed by the crowd. He says: “I have been thinking they’ll do it for a while – but they have with the iPhone 5 … just in one way only!” – Speaking in regards to the iPhone 5’s extra screen length; not width.

Apple’s argument for the case was to remain easy-to-use in one hand, but many manufacturers offer a range for the user to decide from; for example; the latest HTC flagship ranges from the One Mini, the One, and the One Max.

Many of the larger devices – sometimes referred to as ‘phablets’ – are resounding successes.

Woz rightfully points out: “You walk into a store and iPhone has got the smallest screen of all”

As a man who is very open in his love of being at the cutting-edge of technology trend; he has some interesting thoughts regarding the rise of “wearables” and connected devices.

In smartwatches he states: “I got this iPod Nano and I wear it all the time on flights; and I think; what a nice interface to swipe with my hand” but he really wants integration with iOS voice assistant Siri.

Most current notable watches including Kickstarter-success Pebble, Sony’s SmartWatch, and Samsung’s Galaxy Gear are all extensions of your phone and require a Bluetooth connection for the majority of features.

Steve is hoping to see devices which are standalone products: “I want a wearable phone – I don’t want to carry this thing in my pocket – I want it all on my wrist.” Going as far as to go against the industry trend of smaller devices for one the “size of the iPhone today”.

As for Cupertino, he says: “Apple will have something different. Something which will shock the world.”

It’s always refreshing to listen to a speaker with a love of advancing technology from any company. When asked about what will make a compelling smartwatch app; he first responds ‘Google Now’ – a product which aims to offer dynamic information as you need it.

He admires and is excited for the possibilities of ‘Google Glass’ – the wearable technology which you wear as if they were standard spectacles. The device doesn’t place information in your direct sight; but in your field of view as to be useful without distracting.

As a man with many contacts; including within Google; he says he would’ve been able to get hold of the current “Explorer” development testing units but says: “I felt for a new product like Google Glass, I should leave it to people who can properly test – but I drool over people with it.”

Indisputably an out-of-the-box thinker; Woz is a person which appears to look at the same thing in an admirably different way – perhaps it’s partly that which makes Apple’s slogan “Think Different”.

On wearable tech he says: Your smartphone becomes a friend… you talk to it… and sometimes it talks back! They’re becoming closer and closer to you… and what’s closer than on you?”

When asked what his favourite app is; he replied ‘Siri’; but even explained how it was better before Apple’s acquisition in terms of relevant results. The one reason Woz gave for not liking Windows Phone 8 devices is “because I can’t operate them by voice.”

With the rumoured ‘Cortana’ voice functionality just around the corner – that may soon change.

The moderator, Wired’s Nate Lanxon, said: “What we really need – is an AppleScript for phones.”

Woz responded: “That’s what I’ve been saying for years!”

AppleScript is a scripting language created by Apple Inc. and built into Macintosh operating systems since System 7. It was built for inter-app communication; something which Android excels at.

It was a great time to catch-up with Steve Wozniak; as only the previous day Apple announced updates to their range of products – most notably an updated tablet newly dubbed as ‘iPad Air’.

On the new iPad, Woz didn’t seem necessarily blown-away. Speaking of in regards to his own requirements he says: “Yes, it’s thinner, it’s lighter – but I carry a lot of my personal media. 128GB for the current iPad? I had hoped for 256GB.”

Many would, again, see the new iPad as an iterative upgrade; which as Woz states: “The fact that Apple seems to be at a plateau for a while is fine with me.”

He continues: “You can’t come up with brand-new, innovative products every year.”

Whilst fairly disinterested in the new iPad; the new MacBook Pro took his fancy – now with a 1TB SSD – a technology he is passionate about.

To make the many of you with slow broadband speeds feel a little bit more content; Wozniak, a pioneer, doesn’t even have a connection at home. As he states: “40% of Americans don’t have it – not out of choice – they don’t run the wires through my town.”

His connection to the outside world comes via LTE – which displays the power of the technology for internet access in rural areas.

AppsWorld is full of fantastic start-ups; Woz offered his advice to these companies based on vast experience of being a company which no-one believed in at the start. He uses examples of Google and Facebook – “came from people just going their own way.”

It’s Apple which many came to hear about, and on that subject he says: “When we started Apple; Steve Jobs just wanted a successful company. He was just on his phone ordering parts. No-one thought we would be successful.”

Finally, an inevitable crowd question asked “What do you think about iOS7?”

His response: iOS7 didn’t really change my life much from iOS6 – we’re mainly in an apps world – at first I didn’t like they changed the icons. I came around that it is more beautiful – I like the thinner lines.”

What do you think about Steve Wozniak’s comments about mobile technology?

Steve Wozniak was speaking in the Gaming World at AppsWorld Europe 2013.