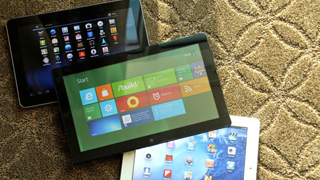 By Ryan Daws | 10th October 2013 | TechForge Media
Categories: Android, Developer,
Ryan is an editor at TechForge Media with over a decade of experience covering the latest technology and interviewing leading industry figures. He can often be sighted at tech conferences with a strong coffee in one hand and a laptop in the other. If it's geeky, he’s probably into it. Find him on Twitter: @Gadget_Ry

It may seem a strange concept for many – especially due to how much Apple brag about their devices usage in teaching – but the reality is, schools are picking Windows 8 tablets over both iPads and Androids.

The reason being isn’t the tablet’s content; where iPad indisputably excels (especially in regards to digital textbooks) – but rather in how easy it is to fit the tablets into current Windows infrastructure.

It’s an area where no-one can match Microsoft; schools, universities, and almost all businesses and institutions are filled with Windows devices. It gives the company a great advantage, and network administrators are generally against switching to other solutions due to difficulties and/or cost.

Two education technology chiefs have rolled out Dell Windows 8 tablets to students with a reportedly positive response from IT departments for the ease of integration into existing networks and systems.

To switch to iOS or Android; it would require completely new management systems to be added to the infrastructure which makes the whole process that much more complicated – as does BYOD (Bring Your Own Device) in many enterprises.

Most educational institutions also rely on the tried and trusted Microsoft Office suite; software which (yet) doesn’t work on iPad… even if latest rumours suggest this could change soon.

The Clear Creek Independent School District near Houston is currently issuing Dell Latitude 10 tablets. Every student in the grade 4-12 district will receive one of the devices. A complete deployment is expected to be complete in two years.

Southern Illinois University in Carbondale is also handing out Latitude 10s to incoming freshmen and faculties. The plan is equip all 2700 students and 500 faculty and staff with hardware.

It’s quite surprising Microsoft themselves aren’t getting involved in this initiative with their own range of “Surface” tablets; especially with their own promotion of advantages. The company does however offer student discounts for those who wish to pick up a device.

This is undoubtedly a positive move for Microsoft to get their occasionally-criticised Windows 8 platform out to more individuals, and hopefully gain a loyal fanbase… not just among network administrators!

What do you think about Windows 8 being picked as the tablet of choice in schools?