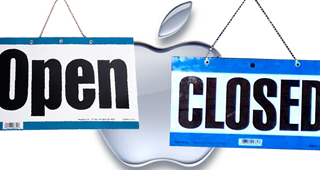 By Ryan Daws | 29th May 2013 | TechForge Media
Editor at TechForge Media. Often sighted at global tech conferences with a coffee in one hand and laptop in the other. If it's geeky, I'm probably into it.

Apple CEO Tim Cook took to the stage at D11; the annual conference held by AllThingsDigital, and spoke of many interesting aspects of the Cupertino-based company’s future, but what caught my attention the most is his attitude to “Open” APIs and even Android development…

The late Steve Jobs was famously quoted as saying: “I’m willing to go thermonuclear war” over a lawsuit which accused Android of stealing iOS’s design.

He was however, said to have told Tim Cook to run the company how he thinks best; perhaps a more “open” future is how Cook thinks best.

Apple’s ecosystem is notorious for being “locked down” in that products, apps, and services by the company only work well (or exclusively) with one another. Google on the other hand, wants its services in as many places as possible and will develop apps for iOS as well as its own Android OS.

The best example is iMessage; the instant messaging service which only works between devices with an “i” precursor and Mac. At Google I/O this year, the search giant released “Hangouts” which works across the major platforms as well as the web.

BlackBerry, on the other hand, announced that the popular BBM service will also shift to iOS and Android later this year. It appears time iMessage got some love on these platforms!

In the interview at D11, Tim Cook said: “We have no religious issue with porting an Apple app to Android, if it made sense for us to do that, we would do that.”

Although by no means confirmation of whether Apple apps will be making an appearance on Android, Cook is a bit more direct when asked about opening APIs to developers in general: “The customer pays us to make choices on their behalf. But you’ll see us open up more.”

You may have noticed ‘FaceTime,’ which was promised to become an open standard, never actually materialised. Let’s hope something comes from this interview.

For any fans of iOS, for any who switched to Android, or for anyone still being a fencesitter waiting to choose their mobile OS of choice; WWDC is just around the corner where we’ll see iOS7 along with Jony Ive’s famed design and perhaps some more “Open” flexibility, exciting times!

Do you think Apple has a more “open” future ahead? Will services be offered to rival platforms?