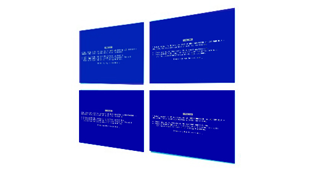 By Ryan Daws | 23rd May 2013 | TechForge Media
Editor at TechForge Media. Often sighted at global tech conferences with a coffee in one hand and laptop in the other. If it's geeky, I'm probably into it.

Microsoft’s latest operating system, Windows 8, has had a less than inspiring start.

Enterprise AppsTech recently covered a Forrester report which warned that the nascent OS would be overlooked in the enterprise, with industry statisticians NetMarketShare reporting only 2.67% overall market share.

But a worrying new study by Israel-based IT support company Soluto shows that of those who are using the new OS, they aren’t using “Modern” apps.

The biggest change in the latest iteration of Windows is the removal of the ‘Desktop’ as your first port of call upon logging in. Now you are faced with a full-screen, colourful start menu; filled with live-tiles displaying information about app’s contents.

One of the toughest challenges is that the Desktop cannot be removed completely, and is only a tempting button press away from familiarity.

As the majority of apps can only be run in this environment – not the “Modern” interface apps Microsoft would prefer you to use – many users will head straight to the desktop.

Interestingly, it’s mainly Microsoft’s own apps which get the most usage, with the exception of Netflix. Perhaps as more apps are released, including those considered “killer” (which Windows Phone 8 also has had a problem in grabbing) the situation will improve.

Companies appear to have a problem supporting Microsoft’s new vision. A very obvious omission to the Windows 8 roster is an official Facebook app; something which would likely boost the platform.

So what is the “most engaging” Modern app? That crown goes to Yahoo Mail. Keep doing whatever you’re doing Marissa Mayer – it may just be working.

We couldn’t finish this article without talking about the “Start Button” which was first introduced with Windows 95. It became an iconic part of the OS, and was put to rest with Windows 8 to the dismay of many users.

Now, due to some crazy basement experiment known as ‘Blue’ (or 8.1, the first major update) it looks like it will be raised from the dead; along with many other fixes and features Microsoft will hope to fix user’s issues.

What do you think of Windows 8? Is there any way to raise engagement with these new “Modern” apps?