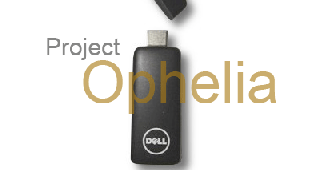 By Ryan Daws | 20th May 2013 | TechForge Media
Editor at TechForge Media. Often sighted at global tech conferences with a coffee in one hand and laptop in the other. If it's geeky, I'm probably into it.

Dell’s recently announced Project Ophelia is a dongle-sized device which wants your displays from July; taking them over with a custom version of Android through any HDMI port and implementing the company’s Wyse PocketCloud for a multitude of cloud-based needs.

PocketCloud allows access to any of your documents or files via any of the supported devices across Web, desktop, iOS, and Android.

This makes way for a productive lifestyle; having secure access on-the-move to a wide variety of platforms, now including TVs with Ophelia.

The device was announced back at CES in January, but without any release date or price. Today, Dell has announced the “thumb PC” will be available from July costing around $100.

Ophelia can scale to any size, and will be demonstrated next week at Citrix’s Synergy conference in Los Angeles on 19 and 55-inch displays. As for the hardware itself, Ophelia features Wi-Fi and Bluetooth capabilities for control and web-access.

Dell, in a press release states: “The product addresses a variety of uses being fuelled by the growing need to access cloud-based apps and resources at any time, or whenever a larger screen high definition digital display provides a superb user experience.”

Just last week TelecomsTech wrote about Dell profits dropping from PC sales in the face of consumers utilising tablets for most of their daily needs. This could be part of a strategy to position themselves as a player in the Android (or Chrome) desktop race, many analysts predict.

Will Project Ophelia be a success amongst business and/or personal users? Is this a response of Dell being worried about the financial future of PC?