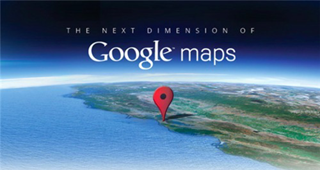 By Ryan Daws | 16th May 2013 | TechForge Media
Editor at TechForge Media. Often sighted at global tech conferences with a coffee in one hand and laptop in the other. If it's geeky, I'm probably into it.

Probably Mountain View’s most well-known, well-loved product (perhaps after that search engine thing), Google Maps, has had a complete overhaul in user interface alongside brand-new APIs for you developers to play with! Let’s take a look.

The new UI removes most of just that, the UI, leaving only a full-sized map to do the talking.

A single search box now serves as your destination for most of Maps features; along with clicking on the map itself which presents a variety of new options.

Most of the new features are presented in a very ‘Google Now’-like “Card” interface which is being widely pushed across all of its services. Google has partnered with Zagat to display reviews of places (alongside your G+ friends, of course) layered upon one of these cards.

Speaking of layers, four of them make up a Google map; the base map > street view > imagery > local data. 200 countries are covered by these maps as of yesterday’s addition of North Korea, with 50 of these countries offering Street View.

One of the most impressive new features is that clicking on a place will bring up all the most popular roads nearby used to get to that destination, whilst others fade away as not to distract you.

Google is very much focused on predicting what you want next, believing that using the map more will allow it to present more information relevant specifically to you. For example; if you’ve just been to a restaurant, it may show you a bar next to wash that food down with!

Moving on to mobile, new apps for Android and iOS are on the way, with an iPad version to be released “this summer.”

These apps integrate Google offers to show you savings at related places nearby; demoed was Starbucks offering “Half off Refreshers” – don’t mind if I do. Google was quick to point out it is launching with a range of partners from Toys R Us to Hard Rock Cafe.

On the navigation side, live coverage of road traffic incidents along with dynamic re-routing is now in effect, hopefully it’ll manage to be as comprehensive as “Waze.” It’s arguably disappointing Google didn’t announce any kind of lane-assistance functionality; although that may truly be the downfall of Sat Nav providers!

So what of new Location APIs to extend your own app’s functionality? Three were announced;

The ‘Activity Recognition’ API appears most intriguing; this will most likely be used in Google Glass to detect when a user is driving, preventing distractions?

This was all done to clearly reassure Google as the mapping provider; no others can offer this level of standard, and are unlikely to within at least the next few years.

Were you impressed by Google’s latest Maps offering? Or perhaps have liked to see anything else in particular?