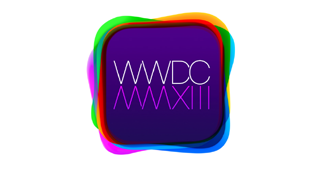 By Ryan Daws | 10th June 2013 | TechForge Media
Editor at TechForge Media. Often sighted at global tech conferences with a coffee in one hand and laptop in the other. If it's geeky, I'm probably into it.

It’s another WWDC 2013 editorial, but as we head full-throttle towards another Apple WWDC, the stakes are high and expectations are truly bigger than ever, although I feel I’ve been quoted as saying this for years.

The biggest changes are expected around the upcoming release of iOS 7; which even the majority of “fanboys” (a term I’ve come to detest) will admit has slacked in both design and features.

Cupertino’s usual venue, the Moscone Center, is currently displaying a giant ‘7’ in Helvetica font filled with gradients of colour (more on this later). It appears the world can soon stop holding their breath and begin the usual flood of admiration or complaints about the latest release.

Other banners are strangely limited in variation, although plentiful. For the first time the buildings opposite have layered, coloured (seeing the pattern?) icons upon them. An ‘X’ is displayed on one poster for OS X with a tidal wave as a background. Oddly though, there’s no iCloud this year…

Cloud services are where Apple struggles; especially in the face of the mighty online force which is Google. High-profile developers such as Daniel Pasco, CEO of development studio Black Pixel, in a post writes: “iCloud hasn’t worked out for us, we spent a considerable amount of time on this effort, but iCloud and Core Data syncing had issues that we simply could not resolve.”

It’s not just developers which have issues with iCloud. On the consumer-side, Apple’s own cloud-based services such as iMessage; the solution for instant messaging between iDevices and Mac, has constant outages, dropped messages, and other weird errors.

Outages are acceptable, they happen. What isn’t okay is Apple’s delivery system, which in many of my tests will say “delivered” to recipient when they haven’t. This is dangerous; imagine a child sending a message to their parent [which says delivered] saying they’re heading home from school early?

We couldn’t carry on talking about failed services and not mention Apple Maps, which after the move away from Google’s Maps to their own solution in iOS6; was a complete failure, causing Tim Cook to issue an apology and make some widely-publicised team changes…

This year marks the first iOS release where Scott Forstall is no longer at the helm of software design, being usurped by hardware guru Jonny Ive.

Ive is of course considered one of the best designers in the industry, but is yet to prove himself on the software side. Insiders seem impressed with his work; taking away the – frankly horrendous – skeuomorphic designs representing “real world” objects favoured by Forstall.

The new design is expected to be ‘flat’ with even a ‘matte’ look to the icons; mock-ups I’ve shown to iPhone fans make them nervous. This reply on Twitter I had from user @shaun_wilkinson: “If it looks like that I will [be] moving to the HTC One.”

Funny he mentions the very device I switched to myself this year (after owning the previous three iterations of iPhone) and I couldn’t be happier; the freedom from Apple’s constraints is liberating.

Android and Windows Phone (sorry BlackBerry!) have brought some real innovations to the table in terms of features and fresh design that make them a very alluring prospect to iPhone users.

While most of Android’s phone apps are the same as their iPhone equivalents (or occasionally supersede due to openness, e.g. Facebook Messenger), very few can touch the quality of iPad applications which I remain to use as my primary tablet for the foreseeable future.

Where am I going with this, other than speaking of my personal preferences? I really hope to see the real-estate of the iPad utilised more productively. Every time I go to the homescreen I still giggle at the huge spaced out rows.

It really is a giant iPhone. Okay, I wouldn’t be seen dead holding a Samsung Galaxy Note up to my face let alone an iPad, but that’s exactly what it is. In terms of consistency and simplicity it’s understandable, although please Apple, do something with that extra space!

On “openness” I wrote an article nearly two weeks ago about Tim Cook’s interview at D11; where he hinted at a less constrained future. Apple iDevices and software are generally critiqued as being very boring and generic in that every one appears more or less the same.

This is due to Apple’s ethos of knowing what their users want; which has clearly worked until now. Everyone likes to add a bit of personalisation, especially now, as more than ever mobiles have become an extension of ourselves.

Really, apart from a couple of rumours regarding design, we know nothing about iOS7. This is both exciting and worrying.

On one hand, the design overhaul (which supposedly required pulling resources over from the Mac team) could have taken so much effort that little was left to extra features.

On the other, maybe Apple has finally got their leaks sorted and has plenty of surprises in-store; it is a two hour keynote after all.

So what can we expect? I think (and sorely hope) for better file management. This was one of the sole reasons I had to switch to Android; where I can plug into my computer, open ‘Music’, chuck my music in (and off) there. Videos? Same. Documents? Same. No “syncing” required.

Here I expect Apple to one-up Android and offer ‘AirDrop’ – a method of wirelessly organising your files on devices.

Although I don’t want to keep comparing with Android, it’s only natural; on that side Google has “Now” as its predictive search assistant.

Last week I reported Apple may have purchased ‘Grokr’ in attempt to combat this functionality. Expect at least significant expansion to Siri, maybe to third party developers.

Android and Windows Phone (with Widgets and ‘Live Tiles’ respectively) offer information at a glance which is incredibly useful and productive. Without ruining the ‘simplicity’ of iOS, many would like similar functionality, an interesting concept is to hold the app to “peek” what’s inside.

We can at least expect to see huge improvements to the notification centre.

So finally, what of Mac? As we spoke about earlier, reportedly some of the team were called over to work on the huge revamp of iOS; so expect new fonts, cleaner design, but nothing revolutionary.

What will be very likely, I believe, is more features from iOS will be moved towards Mac – Siri seems an obvious addition here, especially if opened to developers like we’d expect at this stage.

It wouldn’t be WWDC without one fairly decisive leak of an addition to Apple’s services roster; it appears an ‘iRadio’ is due for an announcement, now all the major record labels have signed up (Sony did at the very last minute…)

As for hardware, new iDevices seem unlikely at this point. Pretty much the entire Mac line-up will quite certainly get a spec-bump to Intel’s latest Haswell processors and such, but there may be “one more thing” … that long-awaited new Mac Pro.

Really, we speculate so much, but this year more than ever we don’t know what Cupertino treats are ready for us. One thing is for sure… we don’t have long to find out.