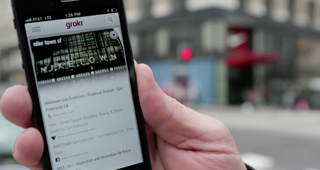 By Ryan Daws | 4th June 2013 | TechForge Media
Editor at TechForge Media. Often sighted at global tech conferences with a coffee in one hand and laptop in the other. If it's geeky, I'm probably into it.

At the D11 interview last week, Tim Cook let slip Apple has acquired nine start-ups since October. Mike Elgan, from Cult of Mac, believes one of these could be ‘Grokr’ a predictive search app for iOS.

Much like Siri was before being implemented natively in iOS5, Grokr has been pulled from the AppStore.

Keen observers may notice this is the same name as Apple’s most famous acquisition.

Google Now has been hailed as the future, deciding the information you need by location and previous search activities even before you know it’s needed. The service then taps into the Mountain View search giant’s just as massive knowledge graph.

The knowledge graph uses the endless information available on the web to form current answers to anything you chuck at it; from weather, to flight times, to how many calories are in a burger (result: a lot!)

I’m sure you wouldn’t have to turn to Google to let you know how unhealthy that tastiness in a bun is, but there are many answers only the graph can deliver fast. This is where Apple can’t currently compete with its own, in-house solution (Google Now is available on iOS).

Or can they? Apple, as shown by the disastrous “Maps” release, prefers not to rely on Google for their services. Through purchasing a start-up such as ‘Grokr’ which already has its sole business in predictive search, Apple may have a slight chance against the might of Google

It’s a tall-order, and Jony Ive’s new iOS will have to integrate apps with one another much more efficiently to pull it off. Google’s Android solution for example, will scan your inbox for items such as movie tickets, and provide information on how to get to your film on time automatically.

Now, time for that burger…

Do you think Apple could have a chance of taking Google’s predictive search crown?