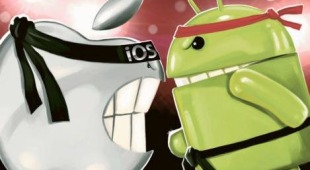 By James Bourne | 7th January 2013 | TechForge Media http://www.cloudcomputing-news.net/
James is editor in chief of TechForge Media, with a passion for how technologies influence business and several Mobile World Congress events under his belt. James has interviewed a variety of leading figures in his career, from former Mafia boss Michael Franzese, to Steve Wozniak, and Jean Michel Jarre. James can be found tweeting at @James_T_Bourne.

Apple announces 40bn app downloads from the App Store, while a forecast suggests Google Play will hit one million live apps by June – so who’s going to win the app store war?

Apple has announced that users have downloaded a total of 40 billion apps from the App Store, with two billion downloads in December – a record for a single month.

This may not be surprising news, particularly given a blog post from analytics expert Flurry on January 3 confirmed that the week between December 25 and January 1 had the most device activations and app downloads in both iOS and Android’s history.

However, an eye-opening stat from Cupertino today revealed that of those 40bn downloads, nearly half were in 2012 alone.

Eddy Cue, Apple senior vice president of internet software and services, said: “It has been an incredible year for the iOS developer community…we continue to invest in providing them with the best ecosystem so they can create the most innovative apps in the world”.

Apple normally plays its cards close to its chest regarding definitive figures for its App Store, but the press release let slip that ‘over 775,000 apps’ had been created for a variety of iDevices.

The most recent confirmed figure for its rival, Google Play, was 700,000 live apps back at the end of October. In June, Google cracked 600,000 apps, with Apple announcing 650,000 apps in the App Store in the same month.

This is particularly prescient given an estimate from The Sociable this week revealing that Google Play should hit one million apps in its store by June if current trends continue.

The forecast used polynomial regression to work out when Play will hit the magical million mark, but according to Darren McCarra, Sociable co-editor, it wouldn’t be a surprise if Google got there before Apple.

The Sociable calculates that right now, there are approximately 800,000 live apps in the Google Play store. Research from Appsfire in November revealed that the millionth App Store app had been submitted, but that the number of live apps remained at approximately 700,000.

Ralf Rottmann, CTO of German app developer Grandcentrix, contributed an extended piece on Gizmodo eulogising over his transfer to Android from iOS with the release of the Nexus 4.

Rottmann noted the pros and cons of the different app stores, noting that “there are still lots of ugly apps on Google Play…[but] I no longer feel as though the apps I use most greatly fall behind their iOS counterparts”.

Of course, numbers can only go so far and it has to be noted that Apple’s Store still brings in far more money than the Google equivalent.

An end-of-year report from Distimo revealed that although Google Play experienced seismic growth in the last four months of the year, the daily revenues of the App Store are still consistently higher.

So which side will win the battle and why?