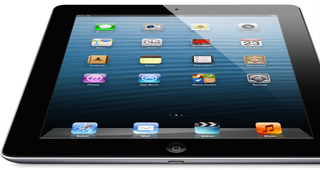 By Ryan Daws | 29th April 2013 | TechForge Media
Editor at TechForge Media. Often sighted at global tech conferences with a coffee in one hand and laptop in the other. If it's geeky, I'm probably into it.

Many take J.D. Power’s satisfaction surveys as the “de facto” source of approval from consumers, taking into account; Performance,  Ease of Operation, Styling and Design, Features, and Cost.

Almost consistently dominated by a certain Californian-based company, will Volume 1 of the “2013 U.S. Tablet Satisfaction Study” prove any different?

Nope, Apple’s iPad is still up there at the top. The iOS-based device scoring a fantastic 836 on a 1000-point scale; customers are clearly very content despite a drop in user satisfaction since iOS6 (granted, results are based on iPhone users surveyed.)

Many still complain Android tablet apps still do not have the same level of polish as Apple’s iOS equivalents, many developers put this down to the myriad of screen sizes / resolutions to support. This is an issue Google is keen to overcome, recently posting an article on their Developers Blog with an “Update on Tablet App Guidelines and Screenshots”.

Google also boosted the capabilities of the ‘Play Store’ to show screenshots specifically for your device (no more seeing phone screenshots for your tablet!)

The survey also brought to light many other interesting statistics, including: Tablet owners who also have a Smartphone will spend 36% more time browsing on their tablet. Perhaps this statistic gives some credence to the rise of “phablets” – phones with displays larger than 5”.

27% of tablet owners plan on purchasing another within 12 months, down from 37% in 2012. This may mean current upgrades are not seen as significant enough or able to perform any extra tasks to warrant the annual upgrade cycle many will with Smartphones.

94% of customers who are satisfied with their tablet device are likely to purchase other consumer electronics by the same manufacturer, most likely due to the convenience of remaining in a single ecosystem which works in perfect cohesion with other devices.

Does Apple deserve the top spot in your opinion? Are there any statistics or trends you find interesting in J.D. Power and Associates latest report?