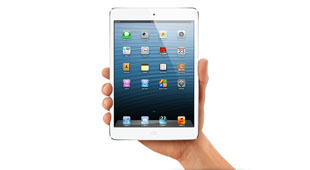 Yesterday in San Jose, Apple revealed its latest addition to the tablet family, the iPad mini, along with the debut of the fourth-generation iPad, a new 13-inch retina display MacBook and a new iMac.

The iPad mini has been designed to compete with the 7-inch Nexus 7 and Kindle Fire Android tablets, which are both priced at £159 and both only offer wifi connections as it stands. The iPad mini is starting at £269 for the wifi-only 16GB model then goes up in price to £349 for 32GB and £429 for 64GB.

Although there has not been any official announcement, EE appeared on Apple’s keynote slides as a 4G LTE partner for the UK. This could be a hint that the 4G-enabled iPad mini and fourth generation iPad will support EE’s new 1800MHz 4G network.

Prices for a 3G or 4G-enabled iPad mini will grow from £369 for 16GB to £529 for 64GB. The iPad mini is the cheapest Apple tablet on the market and it will be interesting to see if there are any significant changes to either Apple or Android’s tablet market share.

App developers will pleased to hear that, unlike the release of the iPhone 5, there are no new aspect ratios. The iPad mini screen resolution is exactly the same as the iPad 2 at 1024×768, so apps will easily fit into the 7.9 inch display without any extra development work.

The iPad mini is a non-retina device, the only other Apple mobile device without a retina display is the iPad 2. It seems Apple has dropped the retina display for the iPad mini to hit their price point, and as the iPad 2 is still on sale, app designers will need to ensure they are producing images for each type of display.

The introduction of 4G-enabled tablets will allow developers to create rich media apps knowing they can be used on-the-go and not just in the home, or wherever there’s a wifi connection. The iPad mini will expand the iOS 6 audience, giving app developers the chance to tap into a new market of app buyers.

Even though the iPad mini runs the older A5 processor, it can still run apps to their full ability, especially 3D gaming apps. Developers will now be able to reach out to a newer gaming audience with the iPad mini, thanks to its A5 processor and its new easily portable size.

It will be interesting to see if people are willing to pay extra for the iPad mini or whether the slightly lower-priced Android tablets, the Nexus 7 and Kindle Fire, will continue to grow in popularity. How will the market look this time next year?