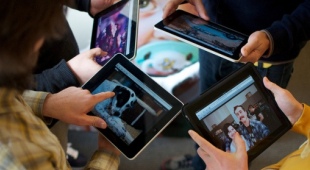 By James Bourne | 28th November 2012 | TechForge Media http://www.cloudcomputing-news.net/
James is editor in chief of TechForge Media, with a passion for how technologies influence business and several Mobile World Congress events under his belt. James has interviewed a variety of leading figures in his career, from former Mafia boss Michael Franzese, to Steve Wozniak, and Jean Michel Jarre. James can be found tweeting at @James_T_Bourne.

A new report from ABI Research has revealed that Apple has lost some of its huge tablet lead, however it still beats the rest of the competition.

As part of ABI Research’s Media Tablets and eReaders research service, the report finds that Apple had 55% tablet shipments, although that share is the lowest since Apple launched the iPad in 2010.

Android, contrastingly, has 44% tablet shipment share. Nearly 14% of Apple’s share was given up to competitors such as Amazon, Google and Samsung.

In other words, ten quarters have passed since Apple’s tablet market share was lower than 55% – which may come as a surprise, especially with the mega-hyped iPad mini launch in October.

The ABI Research verdict is that, with the launch of the iPad mini, demand for regular iPads has gone down – and will only be saved in the Christmas market by the limited availability of the iPad mini.

Developers Mubaloo, in assessing the iPad mini’s impact on developers last month, pondered: “It will be interesting to see if people are willing to pay extra for the iPad mini or whether the slightly lower-priced Android tablets…will continue to grow in popularity.”

Although it’s too early to spot a trend, this research still makes for interesting reading.

“With the introduction of a smaller, lower-cost iPad mini, Apple has acknowledged Android’s beachhead of 7-inch-class tablets, though at the same time, it has failed to deliver a knock-out punch through innovation, pricing, and availability during the most critical selling period of the year,” said Jeff Orr, senior practice director at ABI Research.

Increasingly, the enterprise is looking like a vital home for the tablet.

Research from Context Information Security last month showed that the BlackBerry PlayBook was the best tablet for the enterprise.

This seems reasonable enough, given the iPad is going to primarily be hitting the consumer market – indeed, the report notes that the Apple tablet had good security for what was “predominantly a domestic consumer device”, but could you see the iPad as an enterprise-wide device?

Where do you see the tablet race heading in 12 months?