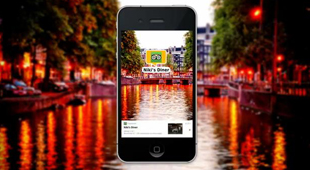 By James Bourne | 15th November 2012 | TechForge Media http://www.cloudcomputing-news.net/
James is editor in chief of TechForge Media, with a passion for how technologies influence business and several Mobile World Congress events under his belt. James has interviewed a variety of leading figures in his career, from former Mafia boss Michael Franzese, to Steve Wozniak, and Jean Michel Jarre. James can be found tweeting at @James_T_Bourne.

Having been on board with Wikitude almost since day one, I’ve seen a number of changes within the augmented reality field. With the ever increasing advancements in mobile and web technologies, augmented reality has grown leaps and bounds in just a few short years. And as with any technology that advances at such a rapid rate, without an industry-wide set of standards, things can become, well, let’s just say “complex” at best.

Three years ago, while working on advancements to Wikitude’s core technology, we saw that a data format which is easy to adopt and meets the AR use cases at the time was necessary. Recalling an old expression, “It is better to light a candle than to curse the darkness,” we set out to define a set of XML tags that the entire industry could agree upon and adhere to. This document eventually became what is now known as the Augmented Reality Markup Language, or ARML 1.0.

While our original specifications were deemed a bit too Wikitude-centric, adoption was met with resistance. Considering this feedback, I looked to other standards, and started whittling away the Wikitude-centric bits, and pairing them down to a more industry-wide standard. This work did not go unnoticed, and at the beginning of 2011, both the W3C and the OGC heard one of my pitches at a conference, and wanted to discuss things further.

Through a series of conversations, revisions, and re-revisions, I presented to the OGC in Taiwan, specifically targeting the formation of a working ARML group within the OGC. Apparently the group liked what we had done and I had to say, as the working group was approved and opened shortly after my presentation.

With the OGC’s official endorsement of this working group, a number of companies and institutions working within the organization quickly became interested and got involved. And it’s not just the groups already operating within the OGC. The Georgia Institute of Technology (Georgia Tech) became an OGC member solely to participate in the ARML group.

Through a wide variety of inputs, needs, specifications, and can’s and can not’s, the ARML working group has drafted a new OGC candidate standard that is currently open to commenting by the public.

This open commenting system can be found at http://www.opengeospatial.org/standards/requests/94, and is open until December 2, 2012.

It’s been a long road to get here, but one that I think is worth every email, sms, skype conversation, and phone call I’ve had. Only with assistance of well defined standards can we all, as an industry, move forward.

Naturally, the Wikitude World Browser and the Wikitude SDK will soon support ARML 2.0. This support falls directly in line with Wikitude’s mandate to provide consumers and developers around the globe with cutting edge technology. By incorporating this standard into the Wikitude SDK, developers can ensure that their creations meet the highest standards of compatibility, thus reaching the largest audience possible.