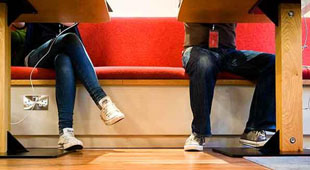 By James Bourne | 5th November 2012 | TechForge Media http://www.cloudcomputing-news.net/
James is editor in chief of TechForge Media, with a passion for how technologies influence business and several Mobile World Congress events under his belt. James has interviewed a variety of leading figures in his career, from former Mafia boss Michael Franzese, to Steve Wozniak, and Jean Michel Jarre. James can be found tweeting at @James_T_Bourne.

5app was very excited to be asked to take part in a two day Hackathon in London last month, based around the idea of using apps to facilitate education. We sent our CTO Tim King along to do the honours and report back on some of the outstanding work he’d seen.

The recent decision by UK Education Secretary Michael Gove to axe the outdated ICT syllabus in schools has been welcomed by industry experts crying out for a change in the way technology is taught in the classroom.

Off the back of this recent news, the room was buzzing with creativity when the Autumn Hackathon 2012, with its central focus on developing apps for teaching and learning, kicked off at the Google Campus.

Gone are the days where entire ICT syllabuses were based upon the functionality of Excel and Word. We are entering an era where teachers are being encouraged to use modern technology not only to keep pace, but to engage pupils and equip them with the valuable computer science skills required for a lucrative future in UK IT industry.

The Autumn Hackathon took place over the weekend on 27-28 October, with teams of aspiring app developers invited over the two days to build apps that would then be entered into a number of award categories.

Apps could be anything the developer desired, the only requirement was that they make learning fun and memorable.

The task at hand resonated with the hackers – perhaps empathetic with pupils having to endure uninspiring ICT lessons – who submitted some creative education based apps.

“Over fifty coders took up the challenge to produce apps to make learning fun, memorable and cool,” said event organiser, Milverton Wallace. “They built some outstanding prototype apps, some of which are destined to be game-changers in the education sector.”

Highly-regarded coder Kornel Lesinski and his partners, physicist George Corney and web designer Prathap walked away with the ‘Best Science app’ category for their ‘Charged Particle Simulator’ app, a physics game designed to facilitate pupil understanding of the interaction between charged particles and magnetic fields.

Other winners included ‘Locker’ by 50pixles who received the ‘Best Web app’ award. Locker is a web alternative to expensive online learning systems used by universities for sharing course information, materials and assignments.

Dr Tim King, CTO of mobile application toolkit vendor 5app, which provides a toolkit that allows apps to be built once and deployed easily over multiple platforms, was highly impressed by the standard of work on display.

“Finally the Government has listened to the experts and decided to teach pupils Computer Science as opposed to the widely derided Information and Communications Technology,” he said. “The UK needs to remain at the forefront of software development and it needs people trained in Computer Science at both school and university level.”

“The fifth Southampton student, Alejandro Saucedo, won the Best Design category and a special prize from RIM for the Best Viral app. As a first year student, Saucedo won one of the main prizes at the 2011 Autumn Hackathon”.

Nurturing the next gen of software developers

Events like this show the level of educational tools we could be providing for our next generations of developers, said Tim King.

“This year’s Autumn Hackathon demonstrated the further potential to integrate Computer Science into all aspects of the teaching curriculum and engage pupils with technology they can relate to,” he added. “The use of apps has become a part of everyday life, so creating apps that encourage creative learning is one method to facilitate pupils’ understanding of challenging concepts.”

Wallace concluded, “In addition to the apps created for learning, innovative apps to streamline curriculum management were also showcased at the event, such as the ‘My BackPack’ app.

“Businesses can receive large benefits from the efficiencies that technology provides and this need to be translated through to our education system. Many of the entries at Autumn Hackathon 2012 have the potential to take off and we hope that the events continue to inspire innovation in the education sector.”

The event sponsors, including Amazon, BlackBerry Pearson, EC1 Capital and QuickBlox, provided the winners with prizes including BlackBerry PlayBooks, Apple iPads and thousands of pounds worth of Amazon Web Services credits.

Register to use the 5app toolkit for free by clicking here, or read 5app’s latest e-Book here.