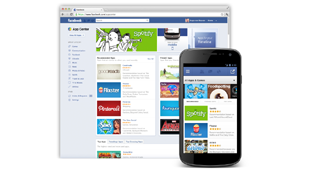 Facebook’s flirtations with the world of social mobile web stepped up a gear this week with the launch of its own app store, offering tasty promotional opportunities for developers, and complete with guidelines and a rating system that will see poor quality apps delisted.

The App Center, as it will be called, will list social apps that utilise the social network’s own login feature, listing iOS and Android, as well as HTML5 browser apps; sending users to either Google Play or Apple’s App Store when an app requires installation.

Interestingly, Facebook will use a number of metrics around user rating and engagement to determine if an app is listed in the App Center at all.

While this is sure to benefit many developers with ‘prominent’ access to Facebook’s army of app-hungry consumers, those that are shunned will be sure to raise a storm of perceived persecution and vitriol.

Developers can create app detail pages, similar to Google Play or the App Store that shows user reviews and ratings and lets you upload screen shots and configure your app permissions.

While Facebook won’t be making any money from app download conversions it fires through to Google and Apple, it will be able to profit from paid HTML5 web apps. The company will take the customary 30% cut of revenue; devs who want to find out more about this should sign up for the beta initiative here.

Before creating your app detail page, read the guidelines to ensure your page does not get removed, added Brady. App detail pages that are eligible for the App Center will be reviewed prior to being listed and priority will be given to those apps that submit before May 18.