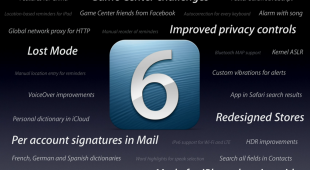 By James Bourne | 20th July 2012 | TechForge Media http://www.cloudcomputing-news.net/
James is editor in chief of TechForge Media, with a passion for how technologies influence business and several Mobile World Congress events under his belt. James has interviewed a variety of leading figures in his career, from former Mafia boss Michael Franzese, to Steve Wozniak, and Jean Michel Jarre. James can be found tweeting at @James_T_Bourne.

It has been revealed that the recently-released Apple iOS 6 beta has a cap on the number of apps a user can have at any time.

According to a post from ‘macjeff’ on the Mid Atlantic Consulting support blog, 500 apps on a user’s device will result in “slow booting, auto-rebooting and other issues”, while breaking four figures of apps will mean your phone doesn’t boot at all.

How Mid Atlantic Consulting discovered this feature was not disclosed. It is particularly notable because there was no such limit on apps in iOS 4 or 5.

From what the post infers, this was an unplanned glitch, and not going to be made permanent. “Apple said they will be fixing this issue but it may not be in the next beta,” the blog noted.

An important point worth noting here is that, while 1000 apps seems a phenomenally high number (although according to blog commenters, some have more than matched it), given Apple’s vision to turn the iPhone into a ubiquitous device which controls everything from pocket gaming to TV remotes, the need for unlimited apps is as prevalent as ever, if not more so.

On a similar theme Aaron Freimark, CTO of Apple-centric accessory specialists Tekserve, asserted his belief in the customisable properties of iOS devices.

“iPhones are set up from the beginning to encourage installation and the customisation of apps,” Freimark said to Enterprise AppsTech.

“You can replace the email client; you can replace the web browser, and [there are] plenty of productivity apps as well, so that kind of customisation to have not only the possibility of installing the app but a real choice of what to install, makes it a very personalised device,” he added.

Apple had released the first iOS 6 beta earlier this week, with features including a more intuitive Siri, further Facebook integration and an expanded FaceTime all promised.

MacRumors.com, who broke the story, only speculated a timeframe of this autumn as to when the OS will be publicly launched.

Would this limit impact you? As Apple has purportedly said the problem will be fixed but maybe not in the next beta – would it put you off buying iDevices with the new OS?