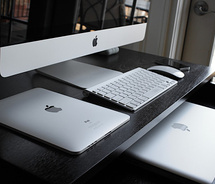 By Dani Millward | 7th November 2011 | Cloud Tech
Covering a range of topics within key technology sectors, including apps, development, marketing and IT, Dani is Online Editor of Cloud Tech. Contact her via Twitter on @Dani_Millward

Apple is planning to update all of its product lines in 2012, according to sources from the upstream supply chain.

Technology news website, Digitimes, has reported that products due for the overhaul next year include its iPad, iMac, iPhone and MacBook Air.

This could result in the introduction of completely new designs by the company, rather than upgrades for existing devices.

Two iPad prototypes could be developed with flat panel models and LED light bars. Codenamed J1 and J2, it has been revealed that manufacturers, including TPK Holdings and Wintek, are to supply the components during the next 2 months.

Digitimes said: “Inventory of key parts and components for the next-generation iPads will be sufficient enough for the production of two million units by year-end 2011,” according to sources.

It’s also been claimed that the next iPad product will be an upgrade to the iPad 2, due for launch in March 2012. The new iPad 3 will not be released until the third quarter of 2012 at the earliest.

The next iPhone and iMac may not be unveiled until the second half of 2012.

To learn more about the future of multiplatform apps within devices and the latest opportunities for developers, visit www.apps-world.net/europe on 29-30 November in London, and hear from leading global brands and industry experts.