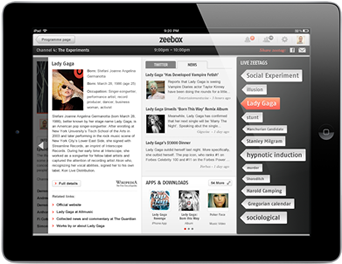 By Dani Millward | 3rd November 2011 | Cloud Tech
Covering a range of topics within key technology sectors, including apps, development, marketing and IT, Dani is Online Editor of Cloud Tech. Contact her via Twitter on @Dani_Millward

A new dual-screen app that links TV and social media together has been released, offering developers a chance to add to the service and advertisers to provide direct routes to products.

Its API will be open for developers to add apps to its code that are specifically created for the Zeebox platform.

Advertisers are also able to include on-screen links to products and brands that are featured in programmes, and correspond them to marketing materials within the app.

Zeebox changes the experience of watching TV, letting users connect Facebook accounts to Zeebox in order to share viewing information with friends and invite them to ‘watch something’ with them.

You have access to programme-related tweets, whilst the ‘Zeetags’ chat box provides information on any topic that is mentioned during the programme. The app also acts as a remote control when used with a Smart TV.

The release of Zeebox is a fundamental part of the growth of TV and social media. A study by Zeebox earlier this year found that 57% of 4,800 13-65 year olds use social networks whilst watching TV. This shows that it’s a prime time for developers to get involved with Zeebox, as figures are expected to grow after its release.

“In many ways the last 10 years have fundamentally shaped how we all expect to consume entertainment, and that’s often driven by technology,” Schmitt continued. “Technological change is driving fundamental consumer change. But TV has remained unchanged since the 1970s. That struck us as untenable.”

Also available as a web app, it will be released for the iPhone by Christmas, along with other operating platforms next year.

To learn more about the future of multiplatform apps and how marketers, developers, businesses, brands and operators are benefiting from the market’s rapid growth, visit www.apps-world.net/europe on 29-30 November in London and hear from leading global brands and industry experts.